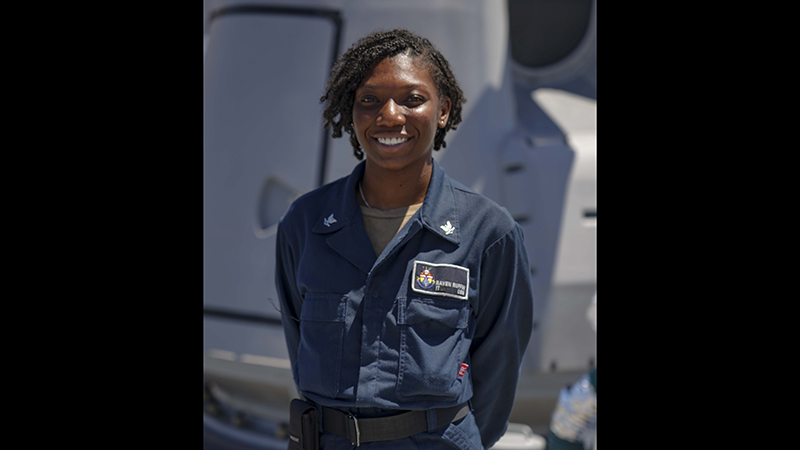 A native of Suffolk, Virginia, is serving in the U.S. Navy aboard the guided-missile cruiser, USS Cowpens.

“I was ready to leave home and get into a different environment,” said Ruffin. “I wanted to start fresh and do something good with my life.”

Ruffin relies upon skills and values from lessons learned in Suffolk to succeed in the military.

“Not every loss you take is a loss, sometimes it’s a lesson if you’re open enough to understand,” she said. “Life is the greatest teacher. Going through something yourself helps you understand it so much better than someone telling you.”

Serving in the Navy means Ruffin is part of a world that is taking on new importance in America’s focus on strengthening alliances, modernizing capabilities, increasing capacities and maintaining military readiness in support of the National Defense Strategy.

“We protect the sea” she said. “There’s a lot of sea out there with a lot of trade and commerce going on in it. We protect that.”

More than 90 percent of all trade travels by sea, and fiber optic cables on the ocean floor carry 95 percent of the world’s international phone and internet traffic.

Sailors like Ruffin, have many opportunities to achieve accomplishments during their military service.

“Making petty officer third class made me so proud,” Ruffin said. “I didn’t want to be a seaman forever, and all the information systems technicians made it on the first try, which was exciting.”

As Ruffin and other sailors continue to train and perform missions, they take pride in serving their country in the United States Navy.

“Serving in the Navy means I get to do something bigger than myself,” added Ruffin. “ My work affects others’ lives in a positive way. I know I make a difference and do something meaningful each day.”