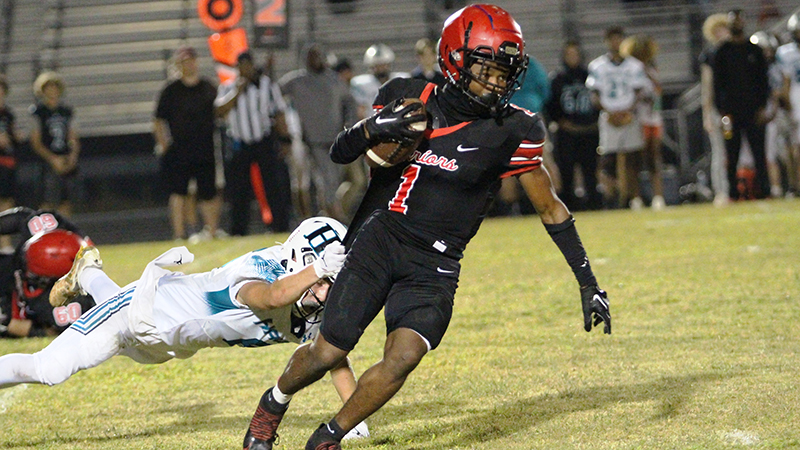 Nasir Holland carries the ball for Nansemond River's Warriors as they shut out the Hawks in a Thursday night matchup.

After two shutouts to open the 2022 season, the King’s Fork Bulldogs enjoyed an offensive explosion on September 16 with a 70-20 blowout of Great Bridge. The performance matched their school-record of 70 points from the opening round playoff win over Jamestown in 2017.

By scoring seven touchdowns before half-time, it enabled Bulldogs coach Anthony Joffrion to empty his bench.

“We played a really good game. The second half, we played everyone and brought most of our starters out,” Joffrion noted as King’s Fork piled up 504 total yards and 27 first downs.

Boyd also had a touchdown run, one of four on the night for the Bulldogs.  Sophomore JaVon Ford continued his outstanding campaign, rushing for 135 yards on 10 attempts and a couple of scores. King’s Fork successfully converted 8 of 9 tries on two-point conversion attempts.

Senior Latavion Wynn led the defensive effort with three sacks, plus blocked a kick. The Bulldogs came up with three takeaways on interceptions from junior Xavien Taylor and sophomore Zachary Walton as well as a fumble recovery by junior Nazman Gates.

Next up will be a matchup with unbeaten Western Branch, who is 4-0, ranked No. 5 in the state in Class 6 and coming off a 47-0 shutout of Grassfield.  While the Bulldogs will be looking for a similar result to their 17-3 triumph over the Bruins from 2021, they know it figures to be their stiffest challenge to date.

“I think it’s just about us not making mistakes, limiting turnovers and making plays on special teams,” believes Joffrion.  “They have great players and we have great players as well.  All the little things are going to be highlighted in this game.  It’s going to come down to coaching and discipline.”

Nansemond River did plenty right in avenging its 7-6 loss to Hickory from a season ago, blanking the Hawks 44-0 on a Thursday night to improve to 3-1 overall.

Three touchdowns and a field goal during a 23-point second quarter enabled them to expand the lead by half-time and they never looked back from there.

“We try to practice as hard as we can to prepare for game nights,” declared Nansemond River coach Alonzo Ricks Jr.  “I give kudos to Coach [Donnell] Brown and his staff. Those guys do a very good job of coaching and teaching.  But our guys were ready to go. We challenged each other and did what we needed to do.”

Junior quarterback Alkendric Overton accounted for five touchdowns, three with his arm and two with his legs, and led an attack that racked up 405 total yards of offense.

“He’s done a good job for us so far,” Ricks said of his dual-threat signal caller.

To get to 4-1 overall, the Warriors will have to beat Indian River, which will be well-rested and coming off its bye week.

“Indian River is going to be a tough task,” acknowledged Ricks as the Warriors try to beat the Braves in the regular season for the first time since 2016.

The Nansemond-Suffolk Academy Saints were unable to pick up their third victory of the season, falling to the Collegiate Cougars out of Richmond 44-19.

Collegiate rolled up 410 total yards of offense on the NSA defense with 250 through the air on 15 completions and 160 rushing on 31 attempts.

So far, Fuhrmann has turned in quite the season statistically with 17 receptions for 323 yards and 5 TD’s to date.

Defensively, sophomore Gavin Angelillo led the squad in tackles with 14 total vs. Collegiate, nine of the solo variety.

The Lakeland Cavaliers dropped to 1-3 overall with a 40-20 non-district home loss to the Smithfield Packers on Sept. 16.

Lakeland built a 14-0 lead after one quarter of play, striking first on an eight-yard TD run from Allen Dockery. With 3:56 left in the opening period, quarterback Jamari Deas connected with fellow sophomore R.J. Jones on a 30-yard touchdown pass.

Smithfield then rattled off 24 unanswered points to go up 10. With 11:31 remaining in the contest, Lakeland drew closer on another touchdown pass from Deas, cutting the deficit to 24-20.  However, the defense couldn’t get the necessary stops as the Packers scored the final 16 points to pull away.