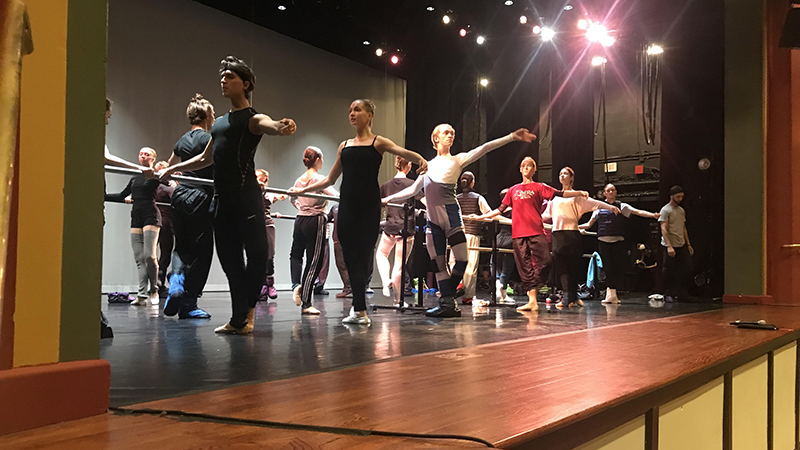 The Kyiv City Ballet’s performance of Swan Lake Thursday evening was exquisite and mesmerizing as it captivated the sold out crowd of 500 in the Birdsong Theater of the Suffolk Center for Performing Arts.

The applause throughout the nearly three-hour performance, and the sustained standing ovation at the end, was transcendent, showing not only appreciation of the ballet’s four-day stay in the city, but also of the hardships that the performers have had to endure as their country of Ukraine has been at war for almost seven months to the day of its final performance in Suffolk, as they have still not been able to return home.

It was certainly a sense that the center’s executive director and CEO, Lorelei Costa Morrow, knowing that if not for the horrific circumstances in Ukraine, the center, and the city, almost certainly would not have been graced with the ballet’s only residency on this U.S. tour, its first-ever.

“It’s been an amazing week,” Costa Morrow said. “I can’t imagine what the dancers are going through, so for them to take a chance to come to Suffolk and share their experience and share their stories with us, it’s been absolutely amazing.”

It started out with a reception for the Kyiv City Ballet Monday with Mayor Mike Duman giving a “Welcome to Suffolk” proclamation, a performance of the Ukrainian National Anthem performed by Nataliia Sytnyk and Tetiana Ordono from the Tidewater Ukrainian School and a special message of peace by Volodymyr and Alesksnadra Yakovlyeva, two children of a Ukrainian refugee family living in Virginia. The Peanut City Cloggers also performed in between ballet performances Wednesday, and during the week, the master classes took place. The Suffolk Center gallery also showcased its new exhibition, “A Tribute to Peace,” curated in honor of the Kyiv City Ballet.

Costa Morrow said she could hear the music of Swan Lake wafting through the hallways as she was working in her office, occasionally poking her head into the theater stretching and rehearsing. The Kyiv City Ballet gave master classes for dance students and instructors. Students from four schools were able to watch it perform during an open rehearsal and participate in a question-and-answer session with the ballet.

It performed A Tribute to Peace and Men of Kyiv Wednesday and culminated with Swan Lake.

“It’s just unbelievable to have dancers of that caliber on that stage,” Costa Morrow said.

The performances, and their presence in the city, she said, touched the hearts of the community, as “they took a risk and came to Suffolk, and that they’re here to share their artistry, their athleticism and their story and their experiences with us.”

It was also a transformative moment for the Suffolk Center, which kicked off a public capital campaign to raise the remaining money necessary for renovations to the iconic, 100-year old building, which began earlier this summer. To date, it has raised $3.9 million of the $4.5 million it needs — 85% of its goal. The center is looking to raise an additional $300,000 from the public, which will be matched through challenge grants from two Richmond-based organizations — The Cabell Foundation and the Mary Morton Parsons Foundation.

“We’re going to need help with those last miles, and we have help,” Costa Morrow said.

Costa Morrow and others affiliated with the center made their pitches during a final reception for the Kyiv City Ballet, and then she made a brief pitch to the audience in the theater just before the start of Swan Lake, saying she hopes for the Suffolk Center to have “another 100 years of amazing performances.”

And while the Kyiv City Ballet might be a one-of-a-kind experience for the Suffolk Center, its impact to the community goes well beyond a high-profile event.

“I think what’s just as spectacular for the Suffolk Center is not just these once-in-a-lifetime opportunities of bringing a ballet of that caliber to our hometown,” Costa Morrow said, “but all of the opportunities that we give to young people and artists in our community, to nurture them.”