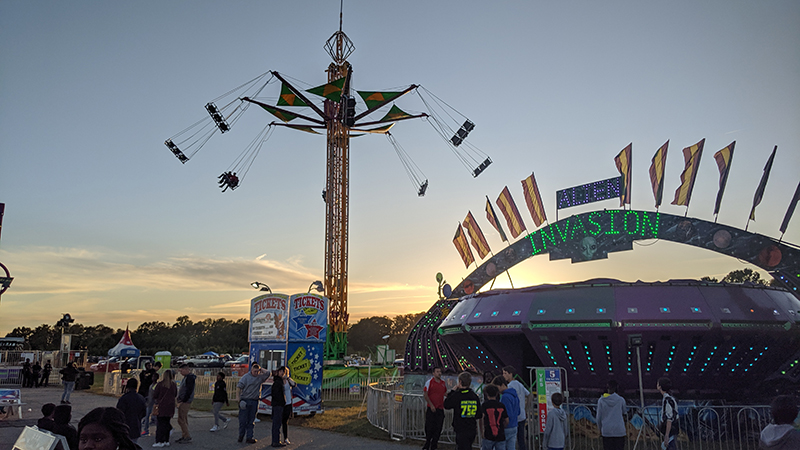 The 44th annual Suffolk Peanut Fest will take place from Oct. 6-9 at the Suffolk Executive Airport.

While the exhibit has traveled across the country, it has only been in Virginia twice, and never in the Hampton Roads region. But with the help of $20,000 sponsorship from Dominion Energy, the exhibit will make its trip to the festival site at 9:30 a.m. Oct. 6, going from the Hilton Garden Inn-Suffolk Riverfront through downtown Suffolk via North Main Street, continuing on Carolina Road before arriving at the festival site at the Suffolk Executive Airport. It will then be on display at the festival grounds for the duration of the event, through Oct. 9.

Peanut Fest chairman Richard Bradshaw said that with the theme of Broad Stripes, Bright Stars and Patriotic Guitars: A Tribute to Our Hometown Heroes and the Red, White and Blue, it was only fitting to have the mobile exhibit from the Stephen Siller Tunnel to Towers Foundation in New York be showcased at the festival.

“I wanted to convey gratitude for our military service personnel (and) our first responders,” Bradshaw said. “I can’t imagine a more thoughtful way to do so than recognize those who gave their lives, both civilian and otherwise, on Sept. 11.”

Tiny Andrews, who is helping with festival logistics, said that “with Mr. Bradshaw’s theme, we thought it was a good idea to try and bring this thing in.”

Andrews said local firefighters and first responders from 31 departments will be part of the honor guard procession, including ones from as far north of Williamsburg as well as some in North Carolina. The Virginia Tattoo bagpipe and drum corps will be waiting for the mobile exhibit at the festival grounds.

The tractor trailer that holds the exhibit expands to a 1,100-square-foot museum that honors the lives of those lost Sept. 11, 2001, including firefighters and other first responders.

Bradshaw said firefighters who served at Ground Zero will serve as docents for the museum during Peanut Fest.

He credited the nearly 200 volunteers with helping to make the festival one for everyone to enjoy.

There are also several pre-festival activities, including the Pilot Club-sponsored Queens Banquet and Fashion Show Sept. 28 at the Hilton Garden Inn-Suffolk Riverfront, the Suffolk Peanut Fest Golf Tournament Sept. 29 at Sleepy Hole Golf Course, with proceeds going to the Tunnel to Towers Foundation.

The Peanut Fest Parade, which has not been held the past two years due to COVID-19, will take place at 10 a.m. Oct. 1, beginning in the Lakeside neighborhood and winding downtown on West Washington and North Main streets before finishing on Prentis Street.

The Suffolk Ruritan Club’s Shrimp Feast returns Oct. 7 (Only 2,000 tickets are on sale for the event at $40 each), with entertainment by Island Boy, and the Swamp Roar Motorcycle Rally will take place Oct. 9.

“This truly is going to be a very special Peanut Fest,” said Mayor Mike Duman. “It always amazes me every year how many volunteers are involved, the manpower hours, logistics even for law enforcement, personnel to put this together as far as traffic control and security is going to be a huge task.”

The 44th Annual Suffolk Peanut Fest is scheduled for Oct. 6-9. General admission is $10 per person, and children 10 and under are free. Parking is also free. The Oct. 6 Carload Night admission is free, and $50 gets people up to eight all-you-can-ride wristbands. On Oct. 9, all-you-can-ride wristbands will be $30 per person. That day is also Military/First Responder Appreciation Day.

For more information about Suffolk Peanut Fest and associated concerts, events and games, and a full listing of events, go to SuffolkPeanutFest.com or contact Suffolk Festivals at 757-539-6751.