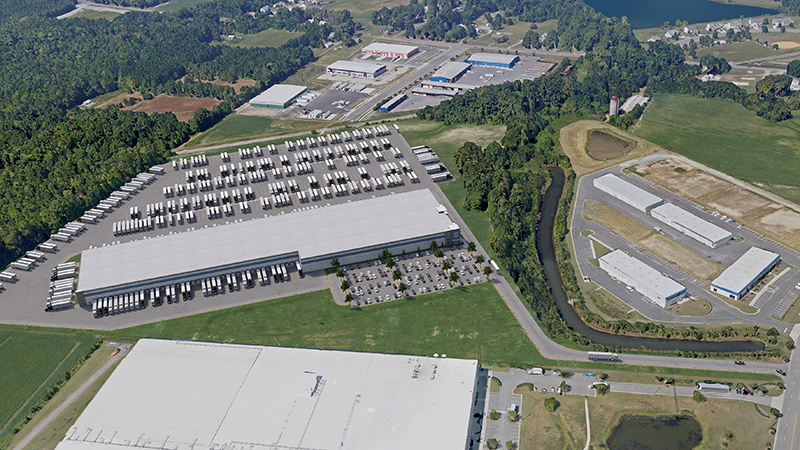 Industrial Realty Group, LLC (IRG), one of the largest industrial real estate developers in the nation, is proud to announce an agreement has been executed to develop a state-of-the-art distribution facility in Suffolk near the Port of Virginia. Upon completion, the project will be fully leased to RoadOne IntermodaLogistics, a single source intermodal, distribution, and logistics services company with a national footprint.

“RoadOne is pleased to be working with IRG to add needed distribution capacity for the U.S. Mid-Atlantic and Southeast regions. This new facility will provide transload services to expedite the movement of inbound cargo from the Port of Virginia to U.S. markets. These strategic initiatives provide our shipper clients with the best logistics services and connectivity to our broad national network,” said Ken Kellaway, CEO of RoadOne IntermodaLogistics. “This is the fourth new transload facility and the second one in Virginia that we’ve added in the last year and a half.”

IRG purchased the 40-acre site in early June 2022. The new building will span about 227,000 sq. ft. and include cross docking for efficient distribution. This part of purchases the company made here that includes property at Judkins Court at Carolina Road in the Coastal Logistics Center. The company paid $867,100 to buy the property from William Griffin to help expand the distribution center being built at 271 Benton Road.

The company announced earlier this year that it would begin construction on a 910,000-square-foot, high-volume cross-dock terminal in Suffolk and a 72,000-square-foot transload facility in Portsmouth. Both sites will include what it says are “significant” trailer parking areas.

Its proximity to the bustling Port of Virginia was also a key reason RoadOne was attracted to the location, officials said in a Tuesday, Sept. 27 news release.

“Having companies the caliber of IRG and RoadOne in this market leveraging The Port of Virginia and its efficiency is a vote of confidence in the future of this port,” said Stephen A. Edwards, CEO and executive director of the Virginia Port Authority. “The Port of Virginia is one of the fastest-growing and most technologically- advanced port complexes in the nation and we are investing $1.4 billion to continue our evolution. We’re excited to collaborate with IRG and RoadOne to support their growth and success.”

“This is our third build-to-suit site near the Port of Virginia, where we’ve witnessed the market’s aggressive demand for space in the past few years,” said Stuart Lichter, president of IRG. “We are committed to developing facilities to support the needs of the port and the companies who will drive job creation and further investment into the community.”

IRG anticipates completion of the project in the third quarter of 2023.

Charles Dickinson, SIOR, of Harvey Lindsay Commercial Real Estate represented both the landlord and tenant in this transaction.