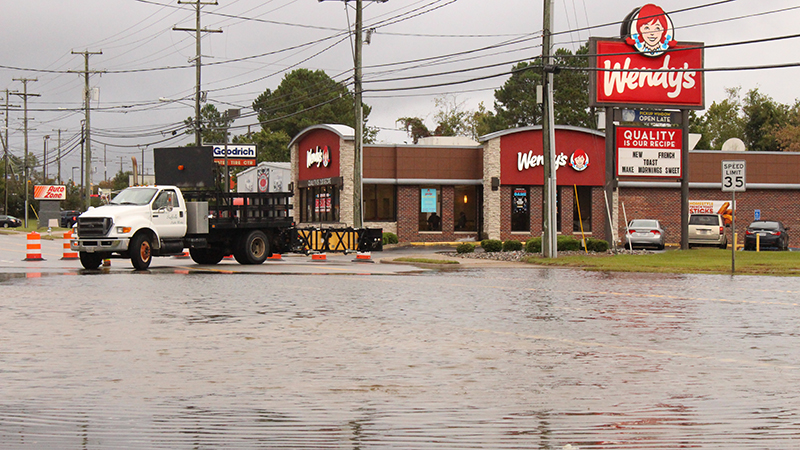 North Main Street around the Kimberly Bridge was closed late Monday afternoon due to tidal flooding.

Schools were closed and city operations were affected by what was expected to be dangerously high tides Monday, but they had less of an impact in the city than anticipated.

While a coastal storm warning remained in effect through Wednesday morning for the city, along with Surry and Isle of Wight counties due to a forecasted Nor’easter spawned as a result of former Hurricane Ian, the worst effects of high winds, gusts and rain did not materialize as meteorologists expected.

The National Weather Service’s Wakefield office said due to a combination of winds becoming more north-northwest, tides were a foot to two feet lower Monday afternoon than was forecasted Sunday, with water levels expected to reach moderate flood levels.

Temperatures remained in the low to mid-50s during the day Monday, with winds staying from the north at 8 to 14 mph with gusts ranging from 17 to 26 mph, not reaching the levels reached last Friday and Saturday.

Across the city Monday, roads were wet but generally not flooded in most areas, except the area around North Main Street and the Kimberly Bridge, which was closed again late-afternoon Monday around high tide after the roadway and nearby businesses had standing water from tidal flooding of the Nansemond River.

The forecast from the National Weather Service’s Wakefield office called for a 50% chance of less than a tenth of rain Monday night with north winds of 13 to 16 mph and gusts to 25 mph, with a low of 49.

A 30% to 40% chance of rain remained in the forecast for Tuesday and Wednesday with highs between 55 and 63 degrees, and precipitation amounts of less than a tenth of an inch expected.

Warmer temperatures and sunny skies are in the forecast for Thursday for the start of the 44th Annual Suffolk Peanut Festival, with a high of 76, and Friday and Friday, more sun is expected, with a high of 80 degrees.

The weekend is expected to be sunny, but cooler, with temperatures in the mid-60s.