Assisted Living resident in custody after fire at the facility 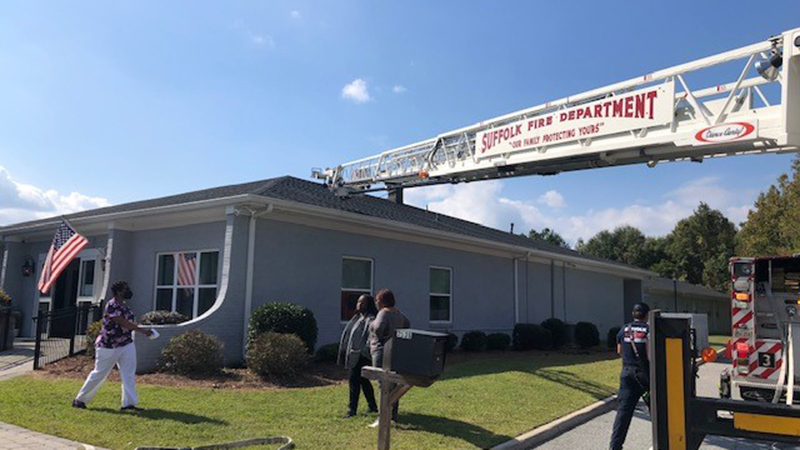 Crews from Suffolk Fire and Rescue work the scene of a fire, believed to be intentionally set by a 70-year-old resident, at Tabernacle Gardens Assisted Living on E. Washington Street in Suffolk. Officials said the fire was limited to a recreation room where a couch and curtains were set on fire.

A resident of the Tabernacle Gardens Assisted Living Facility was taken into custody Monday and has been charged in connection with a fire police said she admitted to setting.

Deborah Fletcher, 70, of Suffolk, is being held at the Western Tidewater Regional Jail facing a felony and three misdemeanor charges in connection to yesterday’s fire — arson of an occupied dwelling, a felony; destruction of property, a misdemeanor; disorderly conduct, a misdemeanor; and resisting arrest, a misdemeanor.

Suffolk Fire and Rescue responded to the assisted living building in the 2500 block of E. Washington Street at 1:33 p.m. Monday, Oct. 10 for a reported commercial fire alarm.

Fire units arrived at 1:38 p.m. to find the assisted living facility evacuated with moderate smoke inside the building. Due to the smoke conditions and indication that a fire was in the building, fire and rescue officials said crews on Engine 3 and Ladder 3 upgraded the alarm to a commercial fire response.

After an investigation to determine the origin of the smoke and fire, crews report that they found a fire in the recreational room of the assisted living facility that was intentionally set to the curtains and a couch.

Fletcher was placed in custody by the Suffolk Fire Marshal’s Office and Suffolk Police Department after admitting to firefighters and police that she set the fire.

The fire was extinguished and smoke was removed from the recreational area, the dining room and two residential halls, officials said in a news release.  Firefighters used meters to perform atmospheric monitoring to verify the conditions in the facility were safe for residents to return.

There were no injuries to residents of the facility or firefighters.  The incident remains under investigation by the Suffolk Fire Marshal’s Office.

Suffolk Fire and Rescue responded to the fire with a total of 12 units, along with two units from the city’s fire marshal and police.