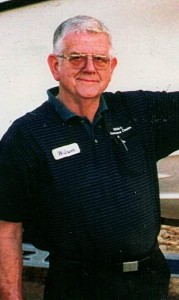 Wilson E. Holland, 83, of Windsor passed away on Saturday, Oct. 8, 2022. He was the son of the late Rodman and Virginia Holland.

Wilson was a 1957 graduate of Windsor High School, attended the Medical College of Virginia and Richmond Professional Institute. He was a shipping supervisor at Planters Peanuts and retired in 1992. After retiring, he became vice president of DeWitt’s Automotive Center in Windsor from 1995 to 2022. Windsor Christian Church had been an integral part of Wilson’s life for 61 years. Positions that he had served within the church include, choir member, usher, finance committee, property committee, past Chairman of the Deacons and was a current Trustee. Wilson was a member of the Church Men’s Fellowship. He served on the Isle of Wight County Wetland Board and was a former Windsor Town Councilman. He was a proud member of the Windsor Ruritan Club for 50 years with the nickname “Wee Willie”. He held many offices over the years in the club and served as the Ruritan National Treasurer. Other organizations that Wilson was a member of also included, the Windsor Purdie Masonic Lodge.

Wilson had many passions in life. Early in his life, he became an automobile enthusiast, who once drove 140 mph on Highway 460 in a 1936 Ford. He was a fishing and boating sportsman with multiple citations of largemouth bass weighing over 10 pounds each. He was an avid lawn care specialist, who found enjoyment, peace and solitude riding a lawn mower. Squirrel and turkey hunting were enjoyable pastimes.

A funeral service will be held at 11 a.m. Thursday, Oct. 13, in the R.W. Baker & Co. Funeral Home and Crematory, Downtown Chapel. Visitation will take place from 7 to 8:30 p.m. Wednesday, Oct. 12, at the funeral home. The family will hold a private burial after the funeral services. In lieu of flowers, memorial donations may be made to Windsor Christian Church, 4 North Court St., Windsor, VA 23487 or Windsor Ruritan Club, 14 Community Drive, Windsor, VA 23487. Condolences may be registered at RWBakerFH.com