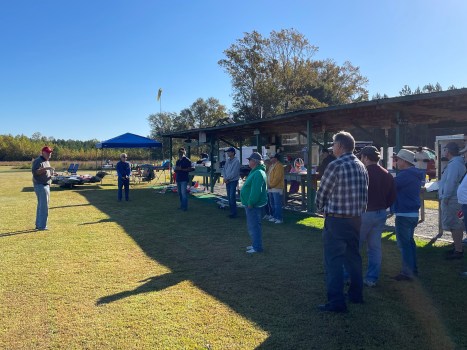 Mills Staylor, at left above, describes the schedule and festivities of the Fun Fly to all those attending. 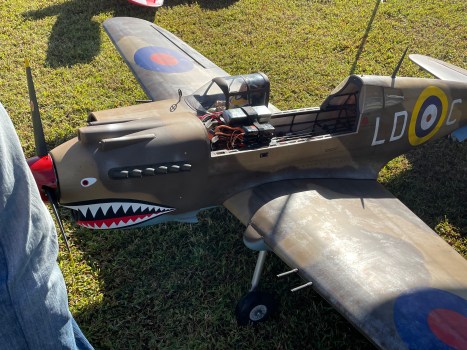 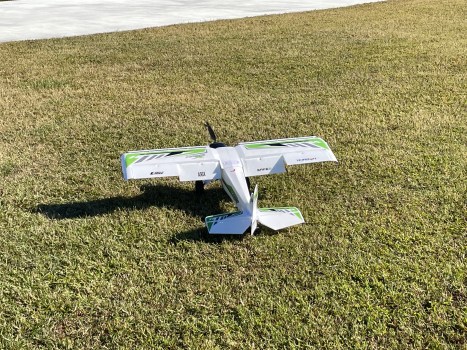 This plane, named timber by its owner Charlie Smith, sits ready to fly during the Toys for Tots fundraiser.

Members of the Hampton Roads Radio Club came together Saturday to a beautiful sunny day for flying their remote control airplanes.

More importantly, members planned the day as their way of ensuring children in need have gifts under the tree this Christmas.

The 18th annual Toys for Tots Fun Fly Saturday, Oct. 15 brought out many club members and their families who attended to make donations for the Toys for Tots program. As an added bonus, they got to enjoy seeing their airplanes take flight.

Hampton Roads Radio Control Club board member and event coordinator Mills Staylor and fellow club member Henry Cahoon shared information about the hobby for those who are interested, their experiences with remote control airplanes and their hopes for its future.

“If you have an interest in aviation and you know that you’re not going to be a real pilot, you can come out here and you can fly an airplane from the ground,” Staylor said. “And the worst thing is you tend to always walk away from a crash. Whereas if you’re flying from behind in the cockpit, you might not be able to say that. So it gives you the enjoyment of aviation.”

A hobby from childhood

Staylor explained how his childhood experience with remote control airplanes encouraged him to introduce his son to the hobby, getting him back into it as an adult.

“Everybody out here, all of the members have some link to aviation,” he said. “Mine was as a kid I started building planes when I was a little boy.”

Staylor said he built plastic models first and then moved on to some control line planes. But then he discovered girls and stopped building planes.

“Now when my son was of an age, he was very interested, very mechanical,” he said. “We saw a demonstration out at Peanut Fest…and I found out how to do it, what we need to do. He got a plane, got a kit for Christmas and a motor and for his birthday in February he got the transmitter and all that.”

Staylor said his son then built the plane.

“I helped him build it, and then he learned how to fly,” Staylor said. “The club members help teach him how to fly. Then, I kind of got in it cause I was standing around doing nothing. I really had enjoyed it as a kid, so I got a plane and started flying.”

Cahoon said he finds it an enjoyable hobby, sharing his his own experiences with remote control airplanes.

“I am a second-generation model enthusiast, so my earliest memories I had airplanes in my hands, so when did I started?” Cahoon said.
“I don’t know. Now I started a control line when I was like six. Building and flying a control line.”

He said he moved into remote control plans at around age 19, noting it is different.

You’re taxiing, you’re flying, you’re landing, so it’s the whole gambit,” he said. “But then as you advance, you start your maneuvers loose and rolls and you start mixing really interesting maneuvers. But this is in my blood, I will do this… the rest of my life. As long as I can.”

Cahoon said those who are interested in building and flying remote control airplanes can take their first steps into the hobby.

“The thing to do is like this… come out to the club and ask,” he said. “What is the best plane to get? What radio do you recommend?”

Cahoon recommended that it they offer to go along for a visit to the hobby shop to leave that wallet in the car.

“Just go look, do not purchase anything until you have done your research,” he said. “Clubs have some ideas. There’s a lot of people that come out here with planes that people sell as a trainer and they’re actually horrible. They should’ve asked us first.”

Cahoon said they have good recommendations.

“The two trainers they had up are very, very good flying trainers,” he explained. “There’s electric ones that fly very, very good as well. Technology has come so far that it actually is much easier to learn how to fly now than it used to be.”

Including the Hampton Road Radio Club, Staylor also gave some places that aspiring flyers can go to.

“Best thing is just get in touch with us and we’ll help them out,” Staylor said. “There are other fine clubs. There’s Tidewater (Remote Control) that’s down off of Route 17 in Chesapeake. There’s a fairly good-sized club over in Newport News, at Newport News Park.”

One of the members of this club came to the event and floated a parachute plane at Saturday’s event.

“We have people from Hampton fly with us because they prefer this club,” he said, adding that they “ just a friendly group of guys and have a good time.”

To the skies and beyond

Cahoon said he hopes future generations will embrace remote control flying as it develops and more layers of the hobby evolve.

“I hope that this hobby has some way of keeping their interest,” he said. “What I have noticed, that people that do this, the tinkering that you have to do teaches you so much about so many aspects of everything around mechanically and electronically and computers.”

“Now, I say it’s probably weekly,” he said. “Drones are massively different from one week to the next. And they’re advancing. Batteries are advancing; the motors are advancing; and the racing — the drone racing.”

Cahoon said as interest in the hobby continues to grow that specific businesses that support remote control airplanes will find themselves continuing to advance alongside the hobby.

The virtual reality where people put the goggles on and fly also will improve.

Cahoon emphasized his enjoyment of remote control airplanes and how with the new generation of flyers, the hobbies and the planes themselves could find significant advancements in the future.

“I like this. I like seeing what I can make this thing do and watch it,” he said. “So for me, this is what I really, really enjoy.”

Younger people may be attracted to it because of their interest in gaming.

“…The drone is more of what they’re used to, as far as like a game,” Cahoon said. “So I hope for them that this offers something that they can get their interest in. And, they will improve the hobby in their future. What will a drone or plane look 50 years from now? Who knows? I would love to see it.”