Boyd to play in Blue-Grey game in Florida next year 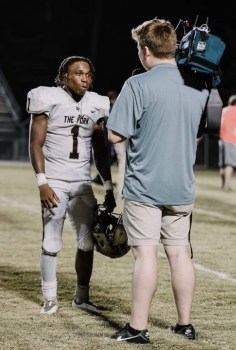 Back in August, one opposing Southeastern District assistant football coach dubbed King’s Fork senior wide receiver and defensive back Kaletri Boyd, “the most dynamic player in the district.”

While peers and close football observers have long known the impact of Boyd, the recognition is starting to come in other forms.

Recently, Boyd was selected to represent King’s Fork High School and the Tidewater area at the Blue-Grey All-American Combine Jan. 30, 2023 at Raymond James Stadium in Florida, where the NFL’s Tampa Bay Buccaneers play. The game will air live on ESPN3.

He also has been invited to the 2023 Dream All-American Bowl. That event is slated to occur at either AT&T Stadium in Arlington, Texas, best known as where the NFL’s Dallas Cowboys welcome visitors, or SoFi Stadium in California, the place that both the San Francisco 49ers and Los Angeles Chargers call home.

In 2021, Boyd enjoyed a breakout junior campaign for a Bulldogs team that captured its first regional title in school history. On offense, the 5-foot-7, 170-pound athlete had a team-high 32 receptions for 694 yards and 10 touchdowns to go with 37 rushes for 370 yards and four more scores. Defensively, his presence was felt consistently, recording five interceptions.

So far through seven games as a senior, Boyd has 18 catches for 325 yards and four touchdowns to go with 19 rushes for 130 yards and three more scores for a Bulldogs bunch that opened the season 6-1 overall.

“Kaletri Boyd is just a team player. He’s electric with the ball in his hands.  When he doesn’t get the ball, he remains a team guy.  He doesn’t pout or waver,” says King’s Fork head football coach Anthony Joffrion of his two-way standout who also has collected 12 tackles, two pass breakups and an interception thus far in 2022.

“Defensively, he can hold whoever he’s covering to zero catches on a given night.  Overall, he’s a really good player and I think a college is definitely going to get a steal.  He’s a kid that’s very hard-working, driven and out to prove to college coaches that it’s heart over height.”

A captain, four-year letterman and honor student athlete, Boyd also started a marketing branding business at the age of 14. He’s the founder of Billionaire Pathway, a mentorship to help scale Teen Entrepreneurship.