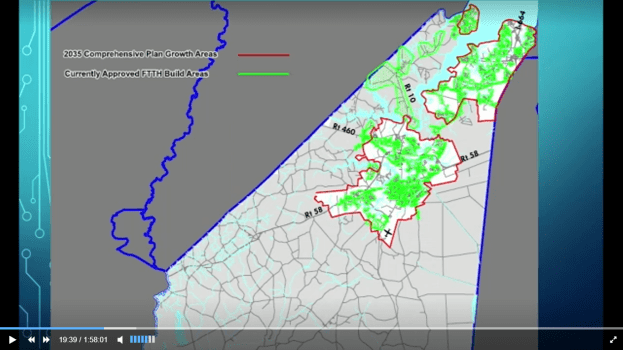 The image presented to council shows the city’s comprehensive growth boundary area, while the green areas are the franchise area Shentel is looking to serve.

“As you are aware, the city has taken a multifaceted approach towards increasing broadband services throughout the city, both from a rural standpoint, a broader economic development standpoint as well as a competitive standpoint and that’s what we’re here to talk about today,” Hughes said.

He went on to say this agreement would do would introduce a new company that would to provide cable, data and telephone services.

“Currently, the only group that’s doing that today is Charter/Spectrum so this would be a competitor offering services to the city of Suffolk, which has been an interest of our citizens for quite some time,” he said.

Originally a telephone company established in 1902, Shentel provides telephone, internet, video and data services alongside tower facilities and fiber optics. As a service provider for Virginia, West Virginia, Maryland, Pennsylvania, and Kentucky, Stentel has a combined customer base of 1 million customers and 860 employees.

Hughes explained the reason the cable franchise agreement is needed.

“What it really does is talk about the opportunity to put assets in the right of way,” he said. “We still have to get permits so we have to know where things are going, but it allows for that opportunity similar to what Charter or other users are in place of our right of way.”

“So for those that are watching on Charter today, you’ll be able to sign up for Shentel and watch this public body as well, he said. “There will also be an opportunity for the school system, if they so choose or a community network as well. So you have three of those, similar to what we have today with Charter.”

Hughes showed a map with comprehensive growth boundary areas marked and then it showed the areas Shentel plans to serve under the franchise. He said it is a “fairly robust area.”

“We can see in the areas where we’re most dense, you can see that it’s almost all green throughout and so it’s going to be a pretty significant footprint for service for our citizens,” he explained.

Hughes said the agreement with Shentel represents the progress the city has made in working with the company.

“We’ve been working with them on this agreement since about 2020,” he said. “You have seen Shentel in front of you previously in 2021, the council approved of a right of way service agreement. That was allowing them to start the process for data which they have started installation within the right of way in pulling some permits on that. Within that agreement, you may recall, it spoke that they had a timetable to move forward to get this franchise agreement that we’re talking about today in place. I think it was a two year window so we’re about a year removed from that, so we made good progress there.”