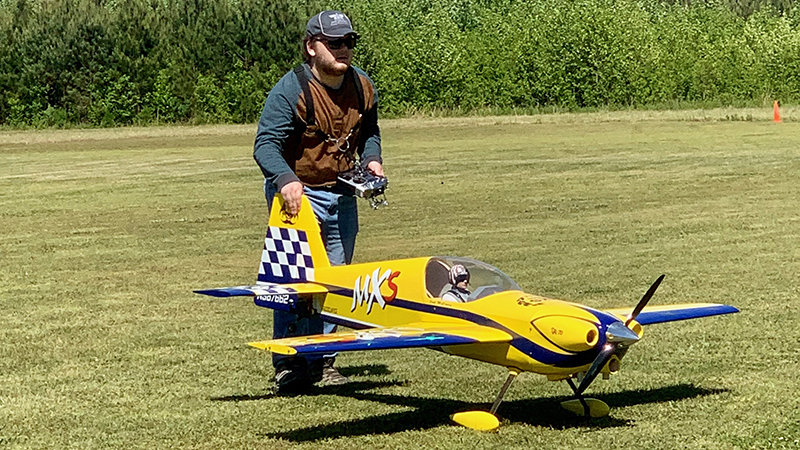 McCreary flying his MXS in the field.

Aviationist Joshua McCreary is receiving praise for his remote control aviation skills. McCreary spoke about how he got into remote control airplanes, his contest and competition career and his hopes for the future.

“Back in October of 2009, Driver Days Fall Festival was happening. My dad at the time was suddenly into antique vehicles and stuff, so we had went out there for that,” McCreary said. “And either him or a friend of his told me that there was a model airplane display down on Driver Lane, so my mom and I went down there to check it out. Before this, I had already been looking at encyclopedias on airplanes and stuff, because I was already interested in aviation, but I didn’t know how interested I really was in it.”

At the Driver Days festival, McCreary met with members of the Hampton Roads Radio Control club and found himself interested. That November, McCreary went to a Toys for Tots event held by the HRRC club, where he got a buddy box to test fly and realized his passion for remote control airplanes. He started using a flying simulator that Christmas, while also continuing buddy box training for nearly two years until he got signed off in May 2012.

“In 2011, I started going there a lot more, hanging out with them,” he said. “And then in 2012, I finished up training with them and got signed off out there and started doing a lot of flying and got very active in it. At that point, that’s when I started looking at wanting to do giant scale airplanes”

“Giant scale, nowadays it’s a relative term. There used to be an organization that was called the International Miniature Aircraft Association (IMAA). It was an association for radio control members that shared a passion for giant scale aircraft,” he explained.

In 2013, he found out about the Youth Masters event at the Triple Tree Aerodrome in South Carolina. The event is a youth-focused contest made to introduce participants to the International Miniature Aerobatic Club (IMAC). That year, he competed in basic and enjoyed the experience.

“That was my first time doing anything like that,” he said. “They introduce you into flying large giant scale airplanes — like 100 ccs to 105, 110 inch airplanes. Flying those throughout in IMAC, learning the sequences, flying precision aerobatics, etc. So, I got hooked with it.”

McCreary decided to join IMAC in 2014, and started flying in basic with a 50 cc MX2 airplane. He won numerous contests, including the Regional Championships in Florida and moved up to Sportsman in 2015.

“The contests are relatively straightforward. You have specific sequences that you’re going to fly during the precision part of contests,” he said. “For the RC (radio control) stuff, you have a ‘known’ and then for Sportsman through Unlimited, you have what’s called an ‘unknown.’ The known is a standardized sequence that changes yearly that you will fly throughout the year and it will be the same sequence throughout the entire year. You can practice as much as you want. The unknown is a sequence that is designed and pulled from a pool of sequences by the sequence committee.”

They use the sequences from the pool, he said, and assign various ones to the contest when the contest director requests them.

“You’ll have, typically, three rounds of ‘knowns’ and then the one ‘unknown’ round. The catch with unknowns is you can’t practice them. You have to look at the sequence, you can visualize with what’s called a ‘stick plane’ which is basically a piece of plywood shaped into an airplane that you can manipulate with your hand.”

He said one can’t practice them on a simulator, because it can lead to being disqualified from contests.

“You’ll learn a sequence, you’ll usually get it handed out the night before you fly it,” McCreary said. “You’ll learn it, figure out how you need to fly it and then you’ll fly it the next day.”

In 2016, he went to judge’s school and became an official judge for IMAC. Around this time, McCreary was building a new plane due to his current one reaching its full capability in competitions.

This didn’t stop him from competing though. He participated in four contests — three with one friend and the fourth with another friend, each borrowing their airplanes during each contest. McCreary won all four. He completed his JTEC Radiowave 2.8 meter MX2 in 2017 and planned for the IMAC World Championships.

“During 2017, we built the JTEC and I flew that throughout 2017 in Advanced. 2017 was the year to qualify for the 2018 IMAC World Championships,” he said. “So that was going to be held up in Muncie, Indiana, and my goal when I started IMAC in 2014 after talking with Wayne Matthews, he was the IMAC president at the time, he told me in 2018 he sees me flying Advance during unlimited at the Worlds.”

Early on in the season, McCreary competed in three contests, competed in another in Ohio, and to Muncie, Indiana for the nationals. After competing in the nationals, McCreary placed in third in advanced and qualified for the U.S. Advance Team for the Worlds Championship. In 2018, he competed in a few more contests before starting college that August. While he stopped competing, he did start practicing for the World Championship in Muncie, Indiana.

“It was raining, there was no hope of competing in the precision sequence because ceilings were low,” McCreary said. “We ended up not flying any more precision flights that entire week. So I ended up placing fourth in Advanced in the world out of 15 to 18 competitors, and then I placed ninth in freestyle out of 13 or 14 competitors.”

He said he was very pleased with how far he was able to come in it.

“There was a lot of competition, there was a lot of good flying that week,” he said. “Very, very intense winds on the second day which didn’t help at all. We were using dog anchors with straps tied to our props to keep the airplanes on the ground. It was blowing a good 30 mph on the ground, and probably a 1,000 feet at the top of how high we were flying, it had to have been blowing probably 40, 50 mph. It was very tough conditions.”

While he hasn’t competed since then due to being in college full-time, McCreary hopes to be back into competitions next year. McCreary shared his goals for his future.

“Eventually I want to maybe do some scale competition,” he said. “I want to endeavor into turbojets one day, but they’re very expensive, and just keep doing it. Sharing passion and love for RC (remote control) flying.”

McCreary offered advice for those who are looking to get into remote control airplanes.

“Best thing to do is find a local radio control club in your area,” he said.

“In our case, we have Hampton Roads RC club, and then there’s a couple out in Chesapeake, there’s one in Williamsburg, there’s a few in the area. But find one that you live near and get some contact info from somebody, find out when they fly, go out there and see when they’re flying and check it out. If they have an event, go out there during an event.”

McCreary continued for those who are thinking of the hobby seriously.

“If you’re seriously interested in getting into it, I recommend starting with a simulator,” he said. “A good simulator to get is RealFlight. But learning on a simulator is much less expensive in the long run as you can learn to fly without tearing an airplane up, having to buy a new one, or repair, etc. Learn the basics, get with a pilot out at the club, do some buddy boxing, some mentoring… and overtime everything will start falling naturally,” he said.

Once a person gets his or her own airplane, starts flying, then they can begin progressing up through the ranks and flying different airplanes, while figuring out what to do.

“There’s a very diverse regime of flying that you can do — everything from cross-country soaring to doing aerobatic competitions, and even helicopter stuff,” McCreary said.