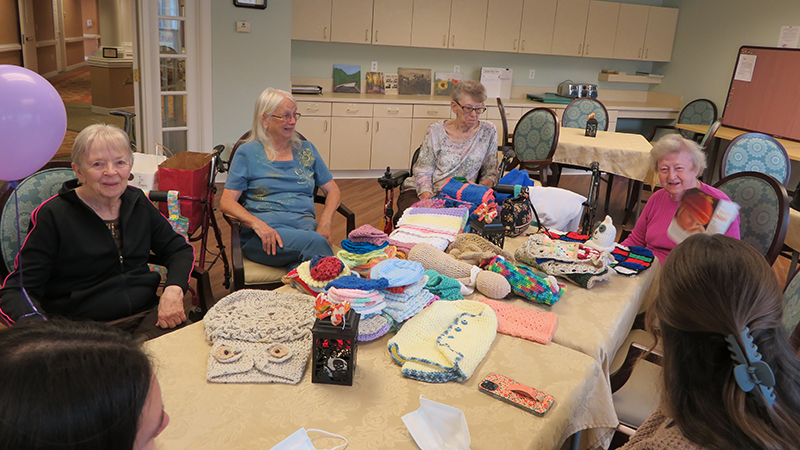 Members of Lake Prince Woods Knitting and Crochet Group are pictured from their meeting with staff from the crisis pregnancy center at a recent meeting where they made donations of their work to benefit the infants and their moms.

During a visit with the LPW Group, the crisis pregnancy center received items including tiny baby caps, blankets, cuddle-toys and bonding squares. These squares, 4- to 6-inch fabric pieces, are used to increase the awareness and bond between mothers and babies that are too small to be held and hugged. The mother holds the cloth next to her skin for a period of time, and then it is given to the premature child to introduce awareness of the mother’s scent. The mother places another cloth near to her skin to continue this exchange process.

Suffolk Crisis Pregnancy representatives Emma Tate and Megan Krupp said they had no idea that so many items had been produced by the LPW Knitting and Crochet Group and expressed much gratitude.

As planned, Tate and Krupp came prepared to present to the group, and others in attendance, the details of their mission to assist pregnant women. One point that they emphasized is that the greatest, overriding emotion of the ladies that seek help is fear. This fear includes a multitude of issues, starting with “What do I do now, what’s next? What choices do I have?”

Emotional and medical assistance are at the core of the early assistance these women receive. Ultrasounds are made available, nutritional needs are addressed and options that the woman can consider are discussed, according to the crisis pregnancy center.

Many of them would not choose abortion but have recognized no other choice given the situation they see themselves in, desperate and without a support system. This is where Crisis Pregnancy Center of Tidewater begins the healing, and, most often, with good results, center officials said in a news release.

Various classes and informational groups are included for the women. Even fathers of the unborn are engaged by the team, at times. Emma and Megan related that there have been many long-term relationships developed with clients, some now in their third and fourth years.

The Lake Prince Woods attendees thanked Tate and Krupp for the visit and for being part of such a needed mission. Pamphlets detailing the material needs and contact options were left with the knitters and crocheters.