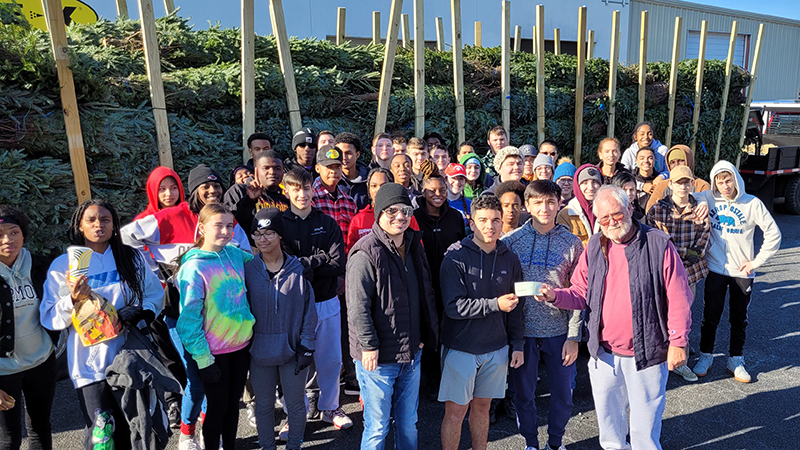 (L to R) Grand Knight Andrew Graf, Cadet Julio Cortes, Cadet Jacob Vejar, and Past Grand Knight Kevin Thomas during the Christmas tree deliveries on November 19, 2022. Graf and Thomas presented a $500 donation to the two members of the Nansemond River Air Force JROTC for their fundraiser, The H2O for Life Project - an initiative designed to help youth fight and solve the global water crisis.

The non-profit Knights of Columbus began their 2022 tree sales Nov. 20 as part of their fundraising for local charities.

The tree lot is located at Line X / Sherwin Williams on 2432 Pruden Boulevard and trees are going quickly.

Past Grand Knight Mike Bibbo said this is their 15 year of selling trees, having taken over the project from Suffolk Jaycees.

“I was an old Jaycee, we took it over from them 15 years ago,” Bibbo explained.

After 350 trees arrived Nov. 19 with sales beginning the next day.

For those in the city who still want to get a tree for this year, Bibbo said this week is the time to stop by and pick it out.

“They’re all Frasier firs, anywhere from 6- up to 12-feet,” he said. “Because of the recession in 2008, a lot of tree farms went out of business. We are now recovering from that.”

Last year, Bibbo said they had 255 trees and sold out in seven days. This year, they were able to get 350 trees.

“We are going to be probably sold out by the next weekend for sure, so if you still want a tree, come out and see us this week,” he said.

Bibbo explained the process the Knights undertake in their support of the various charities.

“We’re all volunteers, everything we raise here goes back into the community of Suffolk. The vast majority of it, probably about 98% of it,” he said. “There are some bigger things, national things like Wheelchairs for Veterans that we support. The ultrasound machines for crisis pregnancies centers, we support that as well.”

But 98% of money that they raise from tree sales and their efforts at the Peanut Fest stays in Suffolk to help people pay bills and buy food, he said. “The Salvation Army is one of our big things,” he said.

Through the years, Bibbo said the Knights of Columbus has given a lot back to the community.

Bibbo said they’re raising anywhere between $8,000 and $9,000 a year through their projects, such as the tree sales.

He went on to explain how residents can support the Knights of Columbus.

“Tree sales and Peanut Fest are our biggest fundraisers here in Suffolk, so supporting us by buying a tree or coming out to Peanut Fest and buying a hot dog or hamburger certainly would help us. Again, we’re a full non-profit organization,” said Bibbo. “To join the Knights you have to be a Catholic man, we are a fraternal organization.”

He said the group’s number one priority is charity out of the four principles for the order. Their support is non-denominational, meaning they help everyone, not just Catholics.

“Every dollar that you spend with us or you give to us is helping somebody locally in this community,” he said, noting this is what they take pride in. “There’s a lot of folks that have needs in Suffolk…Whatever that you’re going through in your life, there are people that are way off, way worse and that’s where we try to step in and at least help where we can.”

Lastly, Bibbo gave recognition to the Nansemond High School students who assist with the trees.

“Even the kids that came out and helped us last week, who’ve been helping us consistently for the last five, six, seven years. The Nansemond River Air Force ROTC, the junior ROTC — it’s part of their community service and they help us unload all these trees, because these trees are fresh, they’re heavy, and they were cut last Thursday and we start selling on Sunday,” Bibbo said.

Because of the amount of work involved in moving the trees, he said the Knights donate back to one of their major fundraisers — H2O Project for Life.

“They raise money to build fresh water wells in undeveloped nations that will have no water,” he said. “So that’s one of the things they try to do every year is fund a complete well. It’s a couple thousand dollars, but we donate $500 dollars to them every year for helping us out and to help them get to that goal.”