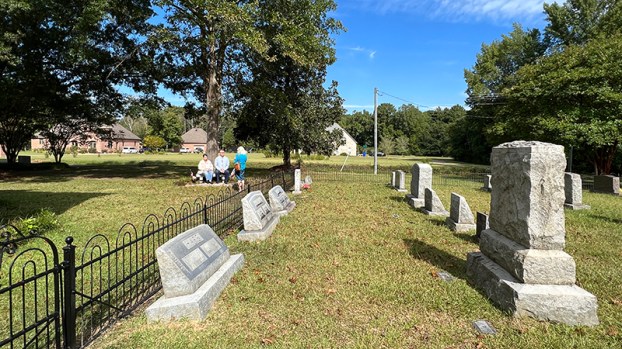 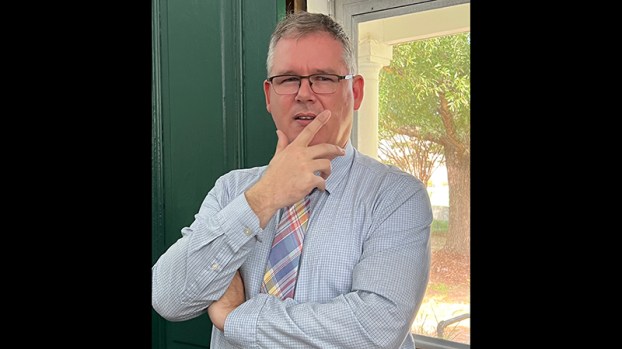 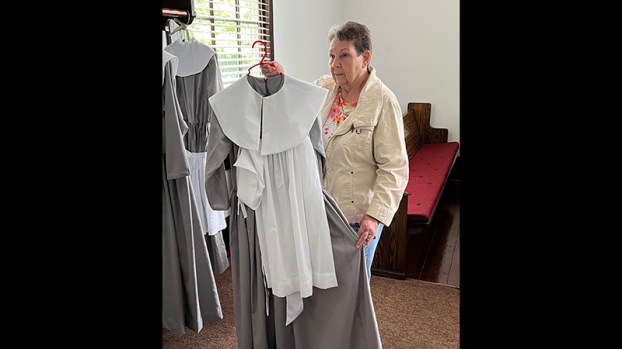 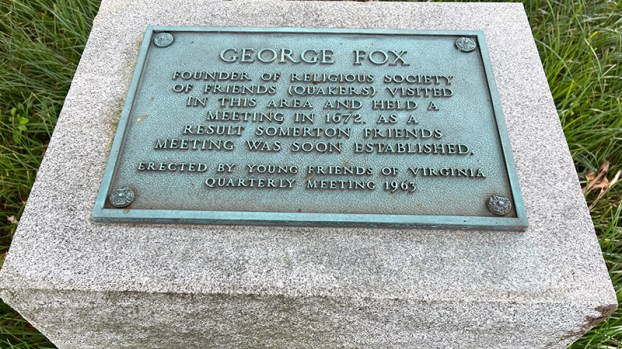 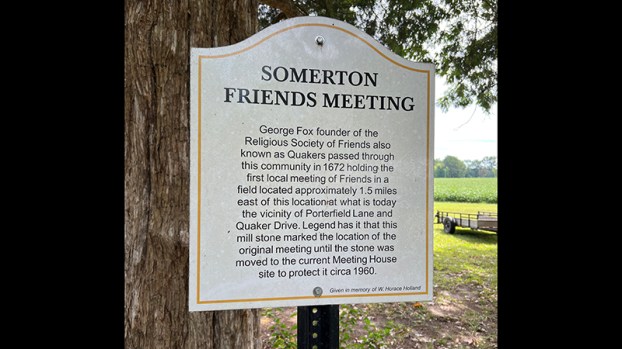 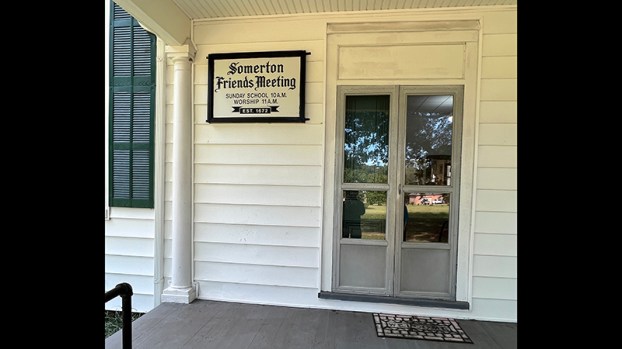 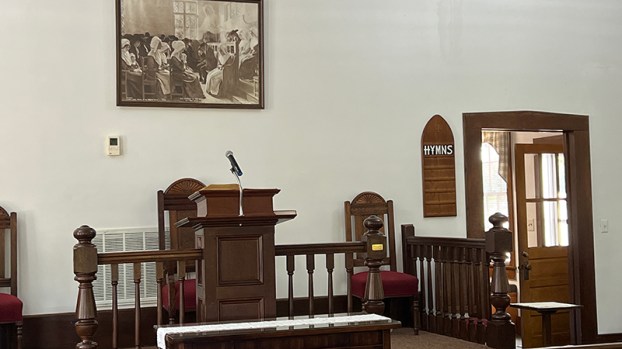 A significant but little-known historic site sits quietly in Somerton, a rural community about 15 miles west of downtown Suffolk and a mere 1.5 miles from the North Carolina line.
A simple white sided building, surrounded by trees and adjacent to a small cemetery, is home to the Somerton Friends Meeting founded in 1672. That was only 65 years after the first English settlers reached Jamestown and more that a century before the U. S. declared its independence from Great Britain.

The Society of Friends Meeting House on Quaker Drive dates to 1869 and welcomes 42 closeknit members – from children to seniors – each Sunday. The meeting (congregation) celebrated its 350th anniversary in October 2022 as the oldest continuous Quaker congregation in Virginia.
George Fox, one of the original founders of the Religious Society of Friends in England, founded the Somerton Meeting. During a mission trip to the Society of Friends in North Carolina, Fox stopped in Somerton. In a field near the current Friends Meeting House, he encouraged he encouraged Quakers in Nansemond County to organize into a meeting there. The Somerton Meeting first met under the leadership of Nathan Newby, a Quaker minister and blacksmith who lived on the edge of the Dismal Swamp.

Vintage homes and swaths of farmland reflect Somerton’s 17th century rural roots as a stop-over on the main road from colonial Suffolk to North Carolina. Sir Thomas Jernigan, a colonist from Somerleyton in Suffolk County, England, developed a 1600s land grant into a 250-acre plantation that spawned the village of Sommer towne, later known as Somerton. Part of Nansemond County until the 1994 Suffolk annexation, Somerton is listed on state and national historic registers.
The colonial village’s Washington Smith Ordinary sheltered travelers and reportedly hosted the  Marquis de Lafayette during his 1824/1825 post-Revolutionary War tour of the United States.
By 1660 five Quaker Meetings existed in the wider Hampton Roads area – Chuckatuck, Nassawadox, York, Norfolk and Hopewell – but harsh persecution by Governor William Berkeley and other anti-Quaker officials backed by the 1660 “Act for Suppressing Quakers” led to the demise of all but the Chuckatuck Meeting. Passed by the General Assembly, the law described Quakers as “an unreasonable and turbulent sort of people… attempting thereby to destroy religion, lawes, communities, and all bonds of civil societie.”

At the time, the English colonies were tightly tied to the Anglican Church of England, and many disagreed with the Friends’ belief that the presence of God exists in every person and with the Friends’ pacifist refusal to serve in the military. Often Quakers were barred from public office, fined, imprisoned, publicly whipped and even hung.

“Quaker” was, at first, a pejorative name for the Friends, but it has become a badge of honor, according to Pastor Richard J. Wilcox of the Somerton Friends, who added that from the late 1600’s rural Nansemond County near the shelter of the Dismal Swamp, was a refuge for dissenters, including a sizeable Quaker population.

The first Somerton Meeting House was a 20 x 20 log structure built in 1702 and paid for in pounds of tobacco, a leading crop of the area. In 1835 the meeting built another larger meeting house on the current Quaker Drive site.

The Friends believe in peace and equality and actively worked against slave trading and slave owning well before the Civil War. Wilcox related a local story about Tom, one of the slaves who in 1767 labored to drain the Dismal Swamp for farmland under the direction of George Washington. Tom was not working as hard as expected, so supervisors withheld his rations. The man survived only with the help of local Quakers who slipped him food. George Washington, Wilcox said, later commented on Nansemond’s “troublesome Quakers.”

Meeting family, John and Edna Hare, maintained an Underground Railroad station at their home in the 1850s. In 1862 four men of the Hare family were imprisoned in a Confederate camp for refusing to bear arms for the Confederacy. The Hares, descendants of some of the original meeting members, were ancestors of some current members of Somerton Meeting.

In the 1860s the meeting built a school next to the meeting house to educate children of slaves and freed slaves. Students came from all around Somerton and Gates County. The neighbors, however, were not pleased, Wilcox said, and arsonists burned the school, as well as the meeting house, on March 12, 1866. Somerton Meeting rebuilt the log school in a week and the new meeting house over the next three years.

Decades later, the Somerton Friends renovated the 1869 meeting house’s interior to accommodate the meeting’s changing needs. Originally the building had two separate but equal front doors – one for women and one for men as the sexes sat separately, divided by a partition, during worship. In 1900 the meeting removed the partition. They added a cemetery in 1910 and an organ, the first musical instrument in the meeting house, in 1916. Although music was not a part of the earliest Friends meetings as organized by Fox, Somerton and other meetings enjoy singing from a traditional Christian hymnal.

Sunday School was also an innovation adapted from other denominations and the meeting added Sunday School rooms in 1928 and electricity in 1940.

The Somerton Meeting joined the North Carolina Yearly Meeting in 1967 and, 50 years later, joined the North Carolina Fellowship of Friends. The meeting has a mission program that supports numerous causes in Suffolk as well as national and international missions. The Somerton Friends Meeting is an active member of the Coalition Against Poverty in Suffolk.

The Meeting House has a bright spacious meeting room and while there are no crosses or stained glass, the white walls reflect Sunday sunshine streaming though the clear glass windows. A large print, “The Presence in the Midst”, hanging in the front of the meeting room depicts a much earlier Quaker meeting with women in the traditional gray and white “plain clothes” seated separately from the men while a vision of Jesus Christ rises above the meeting.

Wilcox, who has been the Somerton meeting pastor for nine years, explained that their worship is a programmed Friends Meeting with an elder facilitating the worship including scripture readings, prayers and sharing of joys and concerns. Wilcox offers a sermon each Sunday and accompanies the hymns on the piano or organ. The hallmark of the meeting is the traditional “open worship,” a period of silence when the meeting members listen for God to speak to them. When they feel the spirit prompting them, they often share with the rest of the meeting.

Notably absent from the meeting as distracting are liturgies and rituals, such as communion or baptism, found in other denominations. The Somerton Meeting does celebrate Easter with a sunrise service and Christmas with a Christmas Eve candlelight worship. Advent brings a candlelit wreath to the meeting to celebrate the light of Christ coming to the darkened world.