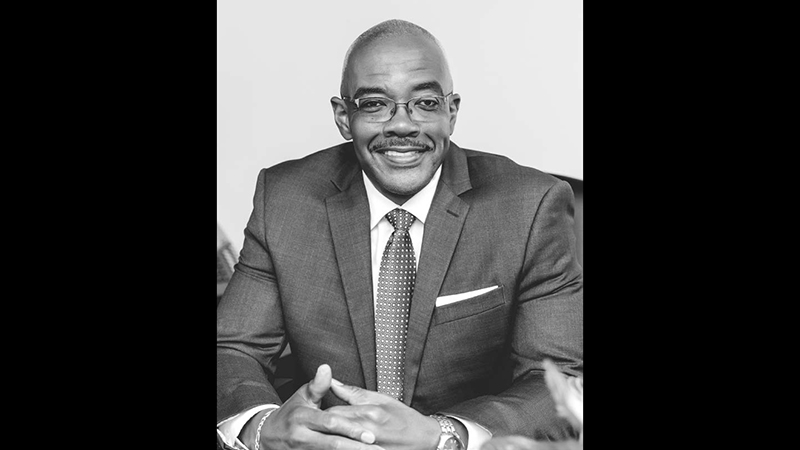 The Rev. Dr. Wayne D. Faison has many things to celebrate in his work with God.

He’s marking his eighth year as senior pastor of East End Baptist Church as well as celebrating the 134 anniversary of the church.

Faison also is celebrating being the first black elected executive director of the Baptist General Association of Virginia — the first in its 199 year history.

Alongside his new role and its significance, Faison talked about his upbringing, how God called him to become a pastor, and how his journey took him to Suffolk.

“At that moment when they voted to elect me, it was certainly a humbling moment at first, but also a celebrative moment,” Faison said. “Especially with my wife and family being there and the teammates that I’ve been a part of, the church leaders, and people that I’ve learned have had relationships over the years where there to celebrate.”

While his election is an historical moment, he said he knows it was something that God had planned all along, and it was just revealed to us at that moment.

“We certainly have to give all honor to him,” he said.

Faison was born and raised in Ocala, Florida. After growing up and graduating high school, Faison attended the University of Florida in Gainesville where he participated in the sports network and gospel choir. Originally wanting to be an architect, Faison graduated with a degree in mathematics.

“Ended up with a math degree, graduated, actually went back to Ocala and ended up in the banking industry,” Faison said. He said he worked at Midstate Federal Savings Bank that was bought out by Amsouth Bank and served in several capacities there.

“Work started on the teleline, worked my way up to becoming vice president in commercial lending over the years,” he noted. “I spent over 15 years in the banking industry before I got called to the ministry.”

Faison said God called him to the ministry when he was in Florida.

He first became part of the staff at his home church in Florida, then moving to serve as pastor at a Flemington, Florida church for five years.

Faison went to seminary at Southern Baptist Theological Seminary in Louisville, Kentucky, but then received his masters of divinity in evangelism church of missions from the Billy Graham School.

“I went back to the Southern Baptist Theological Seminary and got my doctor of ministry in Black Church Leadership,” he said. “After completing that, I went back to Florida and pastored a small church in Flemington, which is about halfway between Ocala and Gainesville.”

He then started looking for opportunities for full-time ministry.

“So one way you do that is that you send your resumes to the different state conventions, state associations,” he said. “And I am a Baptist, so I sent it to the Baptist associations and several states, and I was invited to come up to Virginia to look at a position here at the state association.”
This is how he found his way to Virginia in 2001.

After taking a position in the state association as part of the Virginia Baptist Mission Board, he worked full-time helping churches, leaders, pastors during their training.

Faison explained how his journey got him to Suffolk.

“Back in 2015, part of my role at the state association is to also avail myself to local churches in case the pastor needs a vacation or if they’re going through a transition to serve in the interim capacity. So that’s how I got to Suffolk,” he explained. “Mark Croston had been at East End for 26 years. He got called to LifeWay Christian Resources in Nashville, Tennessee and so they asked if I would do the interim at East End, which I did back in 2013.”

Despite the church performing a nationwide pastor search, they opted not to go with any of the candidates.

“So it was at that time where I told them that, if they couldn’t find a candidate, then I would be glad to serve in that capacity,” Faison said. “That’s how I got to East End in 2014 and I became full time pastor of East End, and continued to work at a part time basis at the Baptist General Association of Virginia at that particular time.”

Faison said he loves the Suffolk area, its people and having the opportunity to serve as a senior pastor of East End Baptist Church.

“It kind of reminds me of my hometown of Ocala, Florida… also the people are so loving and hospitable and both my wife and I really enjoy being in their midst,” he said. “At the end of the day, whenever you find yourself in these situations, it’s all based on a calling from God. As God called me there to be the shepherd, certainly I’m following the Spirit in that effort, but I’m also building relationships with people.”

He said landing at the East Washington Street church has been a dream.

“They were at the process of going through some research and scenarios about building a new building,” Faison said. “It just so happened that with my architecture background, building background and banking background, it all kind of worked together as the church was going through their particular process as they’ve been around since 1888.”

Being there at that particular time was definitely a God thing, he said.

“It’s been a joy to serve East End. It’s a very mission oriented church,” he said. “It’s a very caring church. It’s looking to help to make a difference in the community and around the world.”

Faison said during the summer the church has been involved in global mission trips, helping people as far away as South Africa, Haiti and  Central America, while also assisting those locally.

“We have a food bank,” he said. “We’ve partnered with the local schools. We’re certainly about the youth and the next generation.”

On Nov. 16, Faison made history as being the first black-elected executive director of the Baptist General Association of Virginia. Faison spoke about what the moment was like for him.

“When the previous executive director retired, they began to do their nationwide search for someone to replace him,” he said. “And I can honestly tell you that I didn’t put my name in the hat. I was very satisfied with being a full-time pastor and also my part-time role here in the Baptist General Association of Virginia.”

In a story similar to what he experienced at East End, the nationwide search took place but the association also sought names of others they could approach.

“My name was one of several names that were given because I was on staff and I’ve been on staff for quite some time. It will be 21 years this year.,” Faison explained. “They approached me just to talk to me, not about the position, but what would be my input in terms of what would the BGAV need right now in terms of an executive director for such a time as this in terms of characteristics, qualifications and I shared with them my opinion. And they came back a second time to get a little more detail. I still didn’t put my name in the hat or anything like that. I gave them some additional information in terms of evangelism, church planning and things like that.”

During July, Faison said the Lord spoke to him and said if they do approach him, he should accept the position.

“Actually the next day, I got a call from the chairperson of the search committee and asked me if I was interested in the position,” he said. “They sought me out and because the Lord laid on my heart to respond in the affirmative, that’s what I did.”

He said he shared this so everyone will know accepting the role is a calling, despite being a historical moment for the church.

“We’ll be celebrating 200 years next year, there’s never been an African-American executive director of the BGAV. Certainly it is a moment to be celebrated, but also realizing that God was involved the entire time,” Faison said. “It was the matching of callings as the Lord laid on their heart to approach me as he laid on my heart to accept their opportunity of asking.”

“I actually had to deliver an acceptance message at the annual meeting, and the title of it was ‘Keep Home Alive,’” he said. “A hope of inclusion, a hope of impact, I mean we’ve had a tough three years with COVID and everything else that has been going on and there’s been a lot of deaths and sicknesses.”

He wants to spread his message that God can take whatever someone has and make more out of it than anyone ever thought was possible.