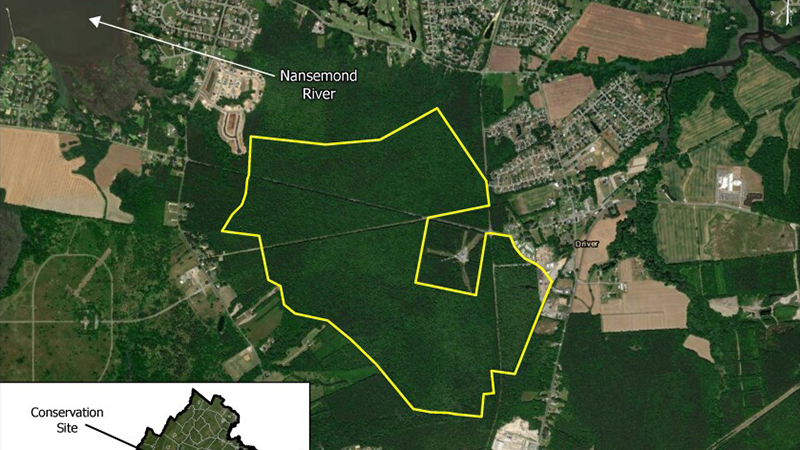 Cross Swamp is located in the Driver community, about 15 miles from the Great Dismal Swamp. It is now back in the hands of Nansemond Indian Nation.

As evening draws near, owls, otters, bullfrogs and bats quietly show themselves exploring for food and shelter.

During the day, raccoons, squirrels, foxes, deer, rabbits, turkeys and bear roam the flora and fauna, sharing the huge brown bog with snakes, hawks, owls and even the endangered Red-Cockaded Woodpecker, with its blood-colored crown seeming to glow in the tall dark trees.

Welcome to Cross Swamp, 504 acres of federally protected forested wetlands about 10 miles north of downtown Suffolk in Driver and about 15 miles from the legendary Great Dismal Swamp.

But unlike its well-known nearby cousin, dominated by the 3,108-acre Lake Drummond, Cross Swamp has no lake. It is almost entirely covered with gum, pine and oak trees and the bamboo-like River Cane, used by Nansemond Indians to make hunting arrows.

It is also landlocked, has no tidal flow, only receiving nutrients from fresh groundwater and rainfall. This means that depending on the annual rainfall amount and weather patterns, at any given time Cross Swamp could be covered in a few inches to a few feet of water, or it could be bone dry.

It is this stable diversity of nature and environment, supporting a rich array of natural resources, that has not only made the pristine site so popular over time, it also ultimately led to the Nansemond tribe losing control of it centuries ago.

As fate and history would have it, however, the Nansemond Indian Nation persevered in its quest to regain ownership of this piece of lost ancestral land. On Oct. 21, tribal leaders took legal possession of the site while also declaring that it will never be for tourism or for any commercial purposes.

Its future will be devoted to, and focused on, conservation, preservation and public education.

“It is important to retain Cross Swamp and other ancestral lands because it provides us with the land and resources to allow our tribal citizens to connect with their heritage,” said Dave Hennaman, assistant tribal chief of the Nansemond Indian Nation. “The tribe intends to have a pavilion constructed there to provide cultural education and outdoor-related training services such as hunters’ education and environmental awareness programs.”

Now that Nansemond tribal leaders again own and control the coveted property, which is technically known as a groundwater wetland impoundment, there are plans to this spring begin preparing land there for a new pavilion and cultural center.

“There is very little access to the site now, but we hope to change that soon,” said Hennaman, adding that although most of the swamp is subject to standing water there are some patches of land that tend to stay dry, including about an acre of land on which the new building would be built.

Ducks Unlimited’s involvement with this particular preservation project is unprecedented, historic and it may just be the beginning of other Native American preservation efforts to come. The organization understands the importance of returning ancestral lands to tribes, Hennaman said, and has offered consulting services to assist tribal members in adopting best management practices for the property.

“I believe it is incredibly important to emphasize and note that this partnership is the first occurrence ever of this nature between Ducks Unlimited and a sovereign Indian nation,” said Hennaman, a New Kent County resident and 37-year Ducks Unlimited member. “Ducks Unlimited took it upon themselves to reach out to the Virginia Outdoor Foundation who then opened a line of communication with us. We are blessed and thankful to have been included in this action.

“It cannot be said enough that Ducks Unlimited, as an organization and a partner, did an incredible amount of work to make this happen” continued Hennaman. “They are the leader in the outdoor industry and a champion for wetland conservation throughout the United States. Furthermore, Karen Waldrop, Emily Austin, Emily Purcell, and Diana Iriarte enthusiastically tackled this process and assisted us in a manner that fostered a seamless transition to ownership of the Cross Swamp property.”

Even though the tribe glad to formally take control of Cross Swamp, a legal process that began in 2018 when the tribe became federally recognized, there is more work to be done in recouping other Nansemond land that has been lost.

“This is a complicated question as Native Americans started losing ancestral lands at first contact with Europeans,” Hennaman said. “We are incredibly thankful for the partners who assisted us in the acquisition of Cross Swamp, however, we are still in the process of officially securing our tribal ground of 70 acres located at Mattanock Town in Suffolk.”

Located at the junction of State Route 337, Route 125 and Route 627, Kings Highway runs through the middle of Cross Swamp and Bennetts Pasture Road is its eastern boundary. That’s where an inventory of Cross Swamp’s living inhabitants is planned for the future, allowing tribal members and others to better manage their wildlife resources, provide a new baseline for plants and animal numbers, determine if the numbers are increasing or decreasing and identity any species that may be endangered.

“There is no way to accurately assume the total number however due to urban sprawl and the development of surrounding areas,” said Hennaman. “One could assume the populations have probably decreased in comparison to what they once were, due to human influences. We need an ecological study to be conducted by individuals certified to do so such as the U.S. Fish and Wildlife Service.”

With the vast quantity of healthy trees on the property, the wetlands provide silt filtration and provide a buffer for inland waterways against coastal flooding and storm surge.

Water in the swamp appears dark brown due to a sublayer of soil and is composed primarily of surface water that is subject to change depending on annual rainfall amount.

Natural swamp habitat that’s been lost over the last 50 years is a result of “people and the development of urban areas,” said Hennaman, adding that according to federal wildlife officials, the swamp provides sanctuary habitat and recovery for such creatures as the endangered Red Cockaded Woodpecker.

Plant life in the swamp also will be scrutinized in the years ahead as the tribal leaders plan to work with the Virginia Division of Forestry to determine if any invasive plant species have invaded the swamp and if so, how to remove them.

Healthy plant and animal populations are good indicators of how well a geographic area withstands inclement weather, toxins and encroachment.

“Globally it has been identified that our natural resources are in peril,” Hennaman said, “and we feel that as Native Americans we are the first stewards of the lands and water and the responsibility falls heavily upon our shoulders.”

Nansemond tribal leaders also feel a great responsibility to create a bright and welcoming life for its younger generations who stand to learn from lessons learned by their elders.

“They will learn the importance of conservation and preserving the ancestral grounds of Native Americans and activities that occurred on them,” said Hennaman. “History forgotten is history lost.”

Young people should learn that all natural resources should be managed responsibly.

“Although land and water are considered renewable, they can be rendered useless if not cared for appropriately, which can have lasting effects for generations to come,” said Hennaman, adding that with the forthcoming cultural center, “people will be able to attend cultural preservation training in an environment free of excessive human interference.”

“This has been a great opportunity for us to bring public awareness to the Nansemond Indian Nation and the fact that we are still here and striving to reconnect with our ancestral lands,” Hennaman said.