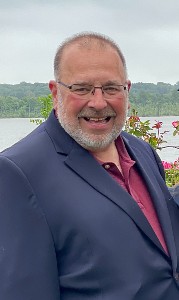 He was born in Suffolk, raised a family in Chesterfield, was in highest spirits in Pittsburgh, Pennsylvania and felt most at home in Nags Head, North Carolina. He did more in seven years post-diagnosis than most people do in a lifetime. Cancer transformed his life and the lives of those around him. He became a fierce advocate for lung cancer awareness and research, caught a travel bug that took him across Europe, Alaska, Panama, New England and Colorado, and fulfilled every man’s dream of buying a muscle car and driving too fast. As a dyed-in-the-wool Steelers fan, Sundays in section 223 at Heinz Field will be one voice quieter.

Clark spent his working years in finance and taxation at Overnite Transportation before enjoying being his own boss after starting his own consulting and tax firm, Dobson & Evans. In more recent years, he served on both the ALK Positive Lung Cancer and Richmond Better Business Bureau board of directors.

An analytical realist who converted to dark humor and optimism post-diagnosis, his outlook on life delivered a deep sense of perspective and an unspoken wisdom to those around him. In the spirit of that wisdom, we can be rest assured that as the world returned to work at 9 a.m. Monday morning, Clark set up a beach chair, cracked a Corona and settled in for a good long sit at the beach.

In lieu of flowers, please donate to ALK Positive to advance life-saving cancer research in Clark’s memory at alkpositive.kindful.com.

P.S. He would want you to know that your donation is tax-deductible.

Memories and condolences can be left at woodyfuneralhomehuguenot.com.