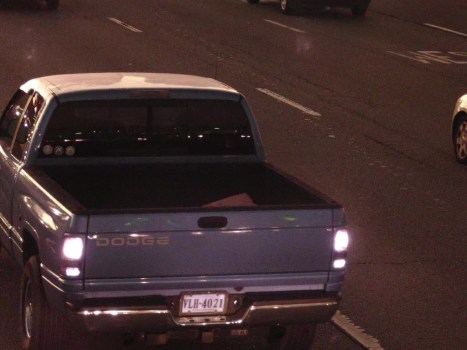 This photo released by Suffolk Police shows the vehicle Robert Bailey was last seen driving on New Years Eve. Officials have not been able to locate him and he was last seen in Suffolk.

The Suffolk Police Department is seeking the public’s assistance in locating a missing adult male who was last seen in the city New Year’s Eve.
On Monday, Jan. 2, Robert Bailey, 69, was reported missing by family members.
A resident of Newport News, Bailey was last seen Saturday, Dec. 31 leaving the residence of a family member who resides in the Chuckatuck area of Suffolk, according to a Jan. 12 news release from Suffolk Police.
When Bailey left he said he was returning home, according to police. It is unknown whether he made it back to his Newport News residence on the night in question. Detectives have been to his residence and spoken with neighbors in Newport News, but did not locate Bailey.
He was driving a light blue 1998 Dodge Ram with Virginia tags of VLH-4021. Bailey has no known medical conditions, but police said his lack of contact with family is not ordinary behavior.
If anyone has had contact with Bailey, or has any further information, they are asked to contact the Suffolk Police Department’s Emergency Communications Center, at 757-923-2350, option 8.