“I see it as a step moving forward,” Councilman Charles Parr said during a work session discussion.

Suffolk Executive Airport currently is a functional utility of the city. If an authority were established, however, the airport would be chartered as an independent authority by the Virginia General Assembly.

The airport currently has an eight-member commission, appointed by city council members. However, an authority would have more autonomy in the airport’s operations than the commission currently has.

Councilman Robert Barclay IV, who served on the airport commission for two years before his election to council, initiated the discussion. He explained that he thinks government should focus on its core functions.

“An airport, to me, is ancillary,” Barclay said. “When it’s not a core function, we tend to treat it sort of as a stepchild.”

The airport originally was built by the U.S. Navy during World War II. When the war was over a year after the airport’s completion, it was turned over to the local government.

“Sixty-five years have passed … and the airport has not made any major progress,” Vice Mayor Curtis Milteer said.

A well-run airport can be a boon for the community, explained Johnny Mazza. Mazza is heavily involved with aviation in the Richmond area, and is on two different airport authorities there. He recommended that Suffolk have an airport authority.

“The best way to make that airport a shining star of your community is to (establish) an airport authority,” he said. “The authority concentrates strictly on the betterment of the airport.”

Mazza said that an authority can react more quickly to situations that come up, instead of having to go through the stringent requirements for local government. The city still would have control over the authority, both through appointing members and through the legislation that would establish the authority.

At the airport commission’s last meeting, a unanimous vote supported the creation of an airport authority.

No decisions were made on the airport authority Wednesday. City staff will do more research and report back to the council in the future on the issue. 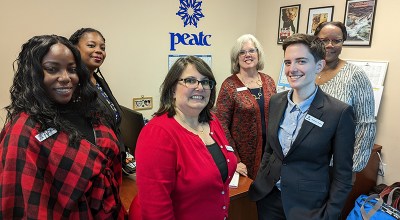