On June 22, 2010, the angels of the Lord took the spirit of Franklin Roy Craddock home to be with his wife of 60 years, Mary Burch Craddock. Also there to greet him was his son, Michael Roy Craddock, and granddaughters, Melanie and Carol Craddock, and his parents and sisters, Beulah and Nita. Roy was born in Plymouth, N.C., on Jan. 21, 1919 to Luther and Aleathia Craddock. He left behind his daughters and sons and their spouses to celebrate his life of 91 years, Antoinette and Butch Twiford, and Leila and Robert Tompert, of Suffolk, Wayne and Mary Craddock, of Stony Creek, N.C., Terry and Cleo Craddock, of Eure, N.C., Tony and Bobbie Craddock, of Statesboro, Ga., Alan and Marcia Craddock, of Danville, Va., and Paul Meadors, of Portsmouth. Also surviving are 12 grandchildren, 12 great-grandchildren, and three great-grandchildren waiting to greet this world this year. He also is survived by many nieces and nephew and a special nephew, John St. John, who thought he was a Craddock, and his faithful dog, Missy.
Roy worked for many years for Greenfield Dairy and as a transport driver for Garnett Oil Company, and truly loved the Garnett family. He was a great father and wonderful grandfather and Pop Pop, and will be truly missed.
In his youth in Suffolk, he played on a minor league football team and was recruited and played one play in one game against the Redskins. He was a great Redskins fan but would not wear his Redskins hat if the “Skins” were not playing well. You could find Roy in front of the TV on any day they had football.
A celebration of Roy’s life will be held on Saturday, June 26, 2010 at noon at the Suffolk Elks Lodge at 629 W. Constance Road, Suffolk, VA 23434. In lieu of flowers, a donation to the American Cancer Society in his memory would be greatly appreciated, sent to 604 Constance Woods Drive, Suffolk, VA 23434. R.W. Baker & Co. Funeral Home and Crematory is serving the family. Condolences may be registered at www.rwbakerfh.com. 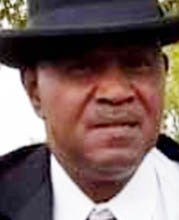