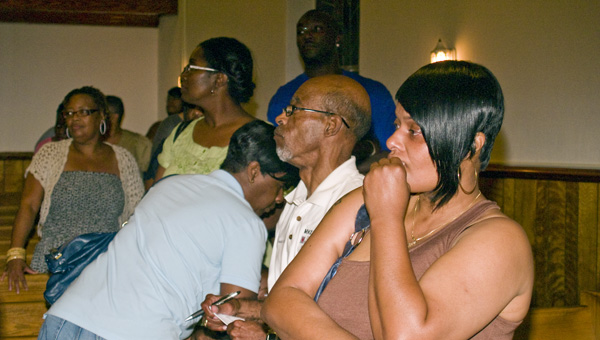 Grieving parents: Jeanette Lewis and A.J. Parker listen to a speaker at the end of Tuesday’s community meeting, held by the NAACP. Lewis and Parker are both parents of murdered youth. Lewis’ son, TyQuan, was shot Aug. 1, and Parker’s son, Deshawn was killed in 2006.

A skating rink, a bowling alley, movie theaters and transportation arrangements to get there would help keep the youth of Suffolk’s downtown area out of trouble, one group said on Tuesday.

Meanwhile, adults in the city need to form a “community action coalition” that would help enable groups from the faith-based, law-enforcement, social-services and other communities to work together to provide solutions to the rising tide of youth violence in Suffolk, city leaders said during the same meeting.

About 200 youth and adults turned out for the special meeting, organized by the Nansemond-Suffolk Chapter of the NAACP, at St. Timothy Baptist Church on E. Washington Street.

The meeting was in response to the Aug. 1 murder of 18-year-old Lakeland student TyQuan Lewis, along with the murder of another Lakeland student, Michael Lee, in Norfolk in January, and the July shooting death of 25-year-old Alissa Johnson.

Gates and members of the Suffolk chapter’s Youth Council organized the meeting in hopes of coming up with a “short-term solution” to the problem of violent crimes perpetrated by and against the city’s young people. He also had hoped to develop an action plan toward implementing that solution.

The youth attending the meeting took its purpose to heart, developing a wish list of services during a breakout session led by Tyron Riddick, the NAACP’s Youth Council leader.

When Riddick asked the group of several dozen youth what they need in Suffolk, the answer came quickly: “More to do.” Amenities such as a skating rink, movie theaters and a bowling alley are needed downtown, the youth said. Longer hours at the East Suffolk Recreation Center, which currently closes early on Saturdays, would give them other options, as well, Riddick said.

For the adults attending, however, the meeting served largely as an opportunity to vent.

“The problem with our children is they’re not being trained,” St. Timothy Baptist Church Pastor Thomas Harden said.

Several speakers agreed that the problems with youth in Suffolk begin at home.

“The examples have to be us,” said Pastor Maurice Johnson of Y2K Academy, bemoaning the shortage of positive role models in today’s society. “Our young men are not maturing into men; they’re jumping into fatherhood.”

Princella Johnson, also of Y2K Academy, agreed with the assessment, and she stressed the importance of Christian values in the home.

“We as adults — we have to take responsibility for our sexual activity,” she said. “What our children need is to be educated that they need Jesus Christ in their lives.”

Johnson and others advocated for a new level of responsibility in the black community.

“People are tired of listening to black people making excuses,” she said. “We’re asking you fathers to appear back on the scene. We’re calling the warriors back to the village.”

There was agreement among those attending the meeting that the stakes are high for Suffolk’s youth, especially African-American ones, and that action needs to be taken.

“What’s happening is that black folks, we’re losing our next generation,” said A.J. Parker, whose son Deshawn was murdered near the church where Tuesday’s meeting was held. Nearly five years since his son’s murder, he said, “I’m still mad, because ain’t nothing happened but talk.”

Gates, the NAACP president, asked those who were committed to helping solve the problem to give contact information so the community action coalition could be started. He promised to hold another meeting “within 14 days” to pursue an action plan.

For its own part, the Youth Council agreed to reactivate its step and dance teams, along with its community choir, and to begin raising money to help more young people participate in NAACP activities.