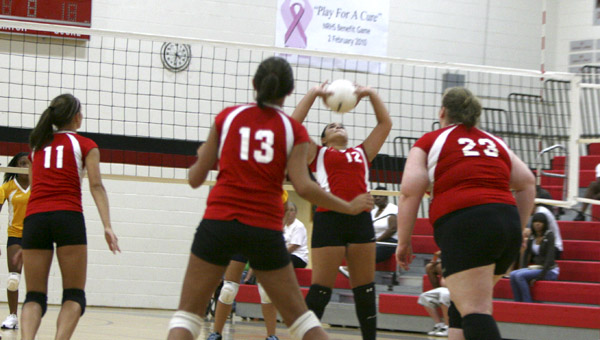 The Southeastern District volleyball season starts a week or so earlier than usual this season, with all 10 schools going into action starting Tuesday.

Officially, Nansemond River and all of its district rivals have had the same preseason time, being able to have 14 practices before the regular season opens.

“It’s seemed like we had a shorter preseason,” Pisani said.

Pisani is actually anxious to get on with the schedule though. The main reason for optimism is she has almost enough returning Lady Warriors to fill out her first and second strings.

Veteran and rookie Lady Warriors alike had no problem Thursday afternoon hosting Franklin in a scrimmage. The Lady Warriors won by wide margins in all three sets.

Nansemond River’s had a busy lineup of scrimmages in the past few days. The Lady Warriors won all three games in a meeting with Bayside and won two of three against Norfolk Collegiate.

Last season, the Lady Warriors got off to a strong start, winning three of their first four matches, before falling back into the bottom half of the district.

Coriano returns as the primary setter and Danielle Gallagher provides kills and blocks at center hitter.

Junior Courtney Lowers is the top returning outside hitter and led the Lady Warriors in kills last season.

Sophomore Sara Gallagher, Danielle’s sister, is a good all-around player and will add to the team’s middle and outside hitting.

“With the group of returning players we have, I feel we’re finally ahead of the game,” Pisani said.

This preseason, the focus has been mostly on improving and perfecting on where the Lady Warriors left off last season rather than starting close to scratch.

“Our serving is what’s going to win a lot of games for us. We’re very strong there and we’ve worked a lot on it for the past four years so it’s paying off now,” Pisani said.

Against the Lady Broncos, Nansemond River totaled 21 aces, with seven by Danielle Gallagher leading the way. Aces and quick rallies won’t be as easy to come by against the top teams in the Southeastern, but all three preseason scrimmages have been good signs.