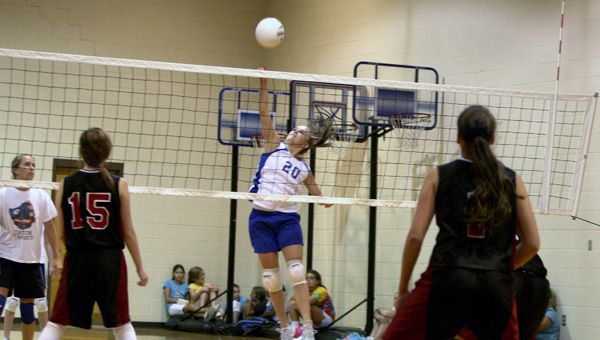 Spike: First Baptist senior Victoria Carr sends a spike over the net Friday during a scrimmage against Veritas. The Lady Crusaders are building off a program-best 12-7 record a season ago. First Baptist starts its regular season Thursday against Atlantic Shores.

Two volleyball seasons ago, First Baptist had the habit of dramatic, comeback victories, even rallying on a few occasions from two sets down for a five-set win.

Last season, the Lady Crusaders improved to their best record in the program’s short varsity history, 12-7, and along with those strides, they didn’t need so many big escapes.

First Baptist capped the season by turning back the clock. The Lady Crusaders were down two sets before winning three straight over Summit Christian to win the Hampton Roads Invitational Tournament in Newport News.

The tourney title was an excellent way for the first group of seniors to leave the Lady Crusader team.

The simple fact of having a senior class, and having to replace them on the court, is a new challenge heading into this season. First Baptist’s first-ever senior class graduated this past school year.

Overall though, the Lady Crusaders are likely to be ahead of most of their opponents when it comes to returning players and returners with lots of playing time to their credit.

Sophomore Morgan Overton shared setting duties last season. Head coach Joseph Cockrell uses a rotation with two setters on the court most of the match and junior Abby Cockrell will move into a setter position.

Most volleyball squads go with one primary setter. Cockrell sees having two as a way to be flexible and have more attacking on the court at the same time.

Another reason coach Cockrell wants to split the setting role is to allow Overton to play more of an all-around game. Overton’s an excellent hitter as well, so freeing her up from some of the setting gives First Baptist more of an attack.

Tiffany Stancil, Megan Farmer and Victoria Carr return as First Baptist’s top hitters. Each have had many strong matches in the kill category during the last two seasons. Junior libero Christine Joslin provides diving and digs to save points.

There are still hurdles as First Baptist goes into its fourth season playing at the varsity level.

“The big thing we have to make up for is a loss of good passing and defensive players,” Cockrell said.

“We have excellent servers and we’ll maybe hit better than we ever have before, but we’ve got to see if we can put the ball in the setters’ hands,” Cockrell said.

As for First Baptist’s schedule, beating an opponent from a larger or more-established conference, such as the Metro Conference or Tidewater Conference, is still a challenge to shoot for.

The Lady Crusaders pushed Metro schools Atlantic Shores and Alliance to five-set matches, but couldn’t top them last season. Within its own league, First Baptist went 11-1.

Perhaps the best volleyball news of all for the Lady Crusaders is the many young players in the school. The sport couldn’t be more popular as First Baptist’s able to form three teams, down to a junior junior varsity squad as 34 players came out for the season.

“For a small school like us, that’s pretty good,” Cockrell said.

By Jeff Findley The 2011 Sprint Cup schedule was released this week and the wild speculation about all the changes... read more