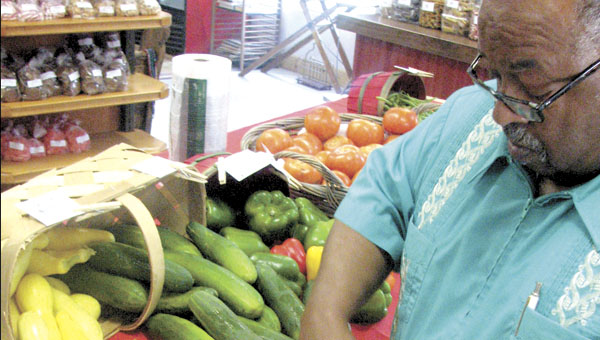 It’s been nearly six months since a beloved community landmark was reduced to a pile of embers and ashes.

On Wednesday morning, The Market in Eclipse reopened its newly painted door to the public. A Sept. 11 grand opening is planned.

“When I put up the open sign, there were six of us here, and we all just started crying and hugging each other,” business owner Christine Treakle said. “And then we cried some more. It was really good. I’m about to cry again just thinking about it. We jumped up and down like little kids.”

The original building was lost in the March 3 fire, along with everything that was in it.

Thanks in part to community members and Leonard Willis, owner of the property and building, who began immediate rebuilding efforts, the Market today is as good as new.

“We’d come in here every day and so many times there would be a pile of donations,” Treakle said. “It was like Christmas all over again to come up and see it sitting there on the porch. We had no idea we had so much support from the community.”

While there are a bevy of old posters, vintage hats and timeworn farm tools mounted on the walls, where family heirlooms once hung, one thing stands out from the rest.

One of the donations brought in was a wooden bench, now used as a shelf on the wall.

“It’s from the original building, which was used as a gas and bus station in the 1960s,” Treakle said. “The customer who brought it in said his boss would only let them sit on it during their lunch breaks.”

Treakle said the building has been in the community since 1927 and is believed to have served as a gathering place and service station for the watermen of Hobson and surrounding communities.

“The store was truly a landmark,” Treakle said. “People have come here for years and years. They know and remember the store. Since the fire, they’ve treated us like family. I didn’t realize how much people appreciate the market.”

Treakle and her family have operated The Market at the intersection of Eclipse Drive and Bridge Road for the past 10 years. The store has provided breakfast, lunch, deli services, Amish goodies, homemade cheese and older memorabilia to those who stop in.

The Market still has all of the old customer favorites.

One noticeable change is the doorknob.

“Our old door had its original 1927 doorknob,” Treakle said. “People come in and say there’s something wrong with the door, and I say ‘because it opens?’ It’s always been a running joke.”