No easy warm-up for Saints 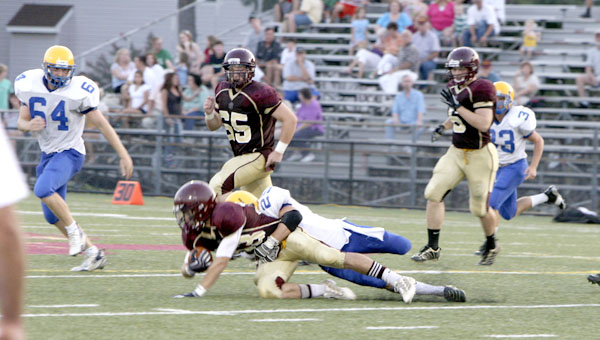 Earlier this preseason, Nansemond-Suffolk’s head football coach Kevin Allen was fine with his squad having one scrimmage on its calendar rather than the customary two before heading into the season.

The main reason for his thoughts boiled down to quality over quantity.

The Saints scrimmaged at Poquoson Friday evening and got what Allen believes his team needed a couple weeks before the games will count.

The Islanders were a Division 3 playoff team out of the Bay Rivers District a season ago and were physical and well-drilled against the Saints even though it’s still August.

Allen gave his second and third strings as many reps as his starters, but from the Saints returning after already being key players on last year’s state championship team to the newcomers, NSA was given a stern test by the Islanders.

“This is a game really just for guys to get the jitters out,” Allen said.

Offensively, the Saints had some success moving the ball on the ground, but weren’t able to sustain any long drives.

As was generally the case all over the field for Allen and his Saints, backup quarterback Jackson Demello took more snaps than returning senior quarterback Domonique Lennon.

“Playing an opponent like this, it really does a lot for the confidence of our young guys,” Allen said. “Jackson really needed this. He’s a kid with a very good arm and good speed.”

On the defensive side, the Saints put together some stops on downs against the Islanders, but Poquoson mixed sharp passing plays with a lot of misdirection and option running plays for a few long scoring drives. The Islanders certainly gave the Saints a wide variety of situations to talk about and work on.

“Most of our problems came from missed assignments, which can be fixed,” Allen said.

“This is what we needed. It doesn’t do a lot of good to play a team you can just kind of beat on,” Allen said.

The Saints open their season Friday, Sept. 3 against Windsor. Going by how the Dukes have dominated the recent meetings, including last year’s 28-0 Windsor win, stopping slashing, misdirection running plays will be an important lesson to learn.

It’s the little things that count