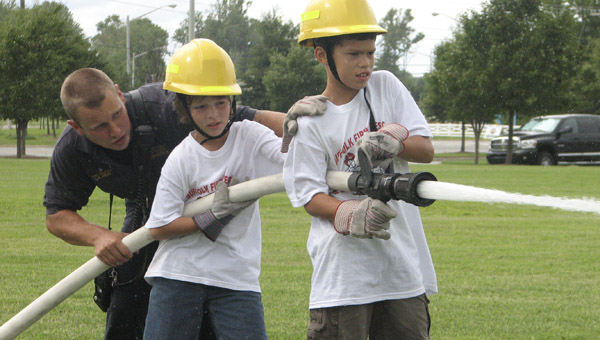 On Tuesday morning, Michael Phillips woke up to a room full of smoke.

Keeping his cool, he crawled on the floor, where the smoke is the thinnest, toward the door, but he could feel it was hot. Knowing the heat could mean there was a fire behind the door, he turned around toward the window and crawled through it and into the fresh air.

Thankfully, it was only a drill — this time.

Knowing how to escape a burning building is a skill that many children never practice until it’s needed, but thanks to the Fire and Life Safety Camp, students are putting classroom safety lessons into practice this week.

“The camps are geared at expanding on the classroom instruction they receive at school,” said Suffolk Fire Department investigator Pam King, who leads the camps. “We partner with the schools to teach some great programs, but here we expand on that and help them apply what they’re learning. It makes it more fun, and chances are they’ll remember it better if they ever have to put it to use.”

Including the 2002 pilot program, the camps are in their ninth year. This year, they are being hosted at three stations with a total of more than 125 students, ages 7-10, in attendance.

The final camp is being held this week at the newly constructed King’s Fork station, where participants rode in a fire truck on Monday and blasted fire hoses on Tuesday.

“We had to wear yellow hats, and it was so powerful we had to have someone stand behind us,” student Hunter Motley, 8, said excitedly after firing the hose. “It’s not like a garden hose. When I was standing behind [my partner] and he sprayed it, the water pushed back so hard it almost knocked me down.”

The smoky scenario Michael escaped from earlier was in the fire department’s fire safety house, in which instructors can simulate a smoke-filled room and teach home safety skills — a large part of the reason the camps exist.

“In the 1990s, we had a major crisis with child fatalities in fires,” King said. “One included four sisters who were found dead, huddled under a bed after a fire destroyed the home.”

The fire department and Suffolk Public Schools reacted by putting a program called “Learn Not to Burn” into place.

That program was enhanced and renamed “Risk Watching” in 1998 when the Standards of Learning were enacted in classrooms.

King said Jeff Messinger was a leading force behind revamping the program to keep it in the schools, and he supported getting the camps up and running. He died shortly before the pilot program began, but his memorial fund still fuels his mission to save lives by educating children.

At the camps, children not only learn fire safety, but other safety tips including proper bike, motor, poison, gun and water skills, taught in a fun way that King said will hopefully help them remember when it counts.

“It’s been so much fun,” Hunter said. “I already want to come back next year.”