On track for a party 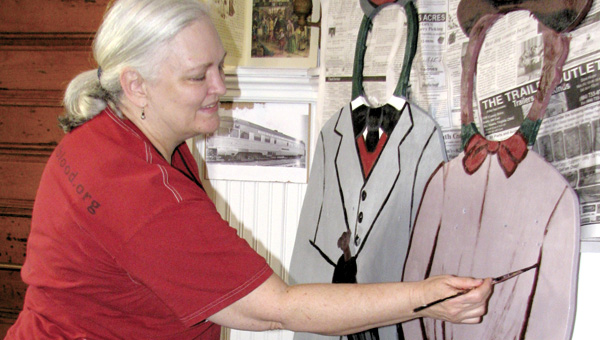 Unlike most parties held at the restored train station, however, this one isn’t for a child with an affinity for Thomas the Tank Engine. Rather, this party is for the station itself.

“Everybody wanted to do something really big and really special,” said Marie Carmean, the train station coordinator for the Suffolk Nansemond Historical Society, which owns and operates the station. “This is an important historical landmark.”

This month marks the 10th anniversary of the station’s restoration, and it is the 125th year since the station was built. A celebration Saturday and Sunday will include new exhibits at the museum, children’s activities, live music, food and more.

“This station was very important to the economic development of our area,” Carmean said. “The train played an important role in the way Suffolk developed.”

At one time, more than 100 trains stopped at the Seaboard station every day, Carmean said. Roughly a quarter of the trains were passenger trains, and the rest helped haul the area’s corn, cotton, soybean, peanut and lumber exports either to the wharf to be shipped on boats, or out of town by rail. Lumber — cypress, juniper and cedar — was cut in the Great Dismal Swamp and hauled by rail to the Nansemond River, where it went by water to destinations near and far.

However, as rail traffic decreased in the area, the Seaboard station became less and less busy and eventually closed. It sat vacant for many years, and was nearly destroyed by a fire.

“People were upset, and didn’t want to lose another one of our old buildings,” said Barbara McPhail, who was president of the historical society during the station’s restoration. “We had lost our city market and several other significant buildings in town.”

That’s when the S.O.S. — Save Our Station — campaign came into being. The grassroots effort began in 1996 and secured funding from federal, state, city and private sources for the total cost of the restoration — about $500,000.

“A lot of community support came forward,” McPhail said. “The city got on board.”

The building was restored to as near its original appearance as possible, McPhail said, replacing white paint and a slate roof with original brick, lighter materials on the roof and as much of the original woodwork as possible.

The station reopened to much fanfare in August 2000.

“It was quite an exciting thing,” McPhail said. “The train station kind of became a little centerpiece to Main Street. It seemed like from there, other things began to happen.”

These days, the train station — especially the 1907 model of Suffolk inside — is one of the best tools for teaching children and newcomers about the area’s history, McPhail said. Hundreds of children visit the station every year on field trips, and they are particularly enamored with the model.

“You can tell all kinds of wonderful stories, not only about the railroad but also about the agriculture and the river,” McPhail said. “They come in here, and they are fascinated by it.”

This weekend’s celebration will feature new exhibits, train-related activities for children and a variety of live musical groups. An Eagle Scout candidate, Patrick Suttle, and other members of his troop recently helped clean the station as part of his Eagle Scout project to help prepare it for the festivities. They also will be on hand this weekend to assist visitors.

Children’s activities this weekend will include the Teddy Bear Express train ride, the Teeny Tiny Farm petting zoo, a mini-Thomas the Tank Engine and more. The gift shop also has new items in stock, and a silent auction will be available.