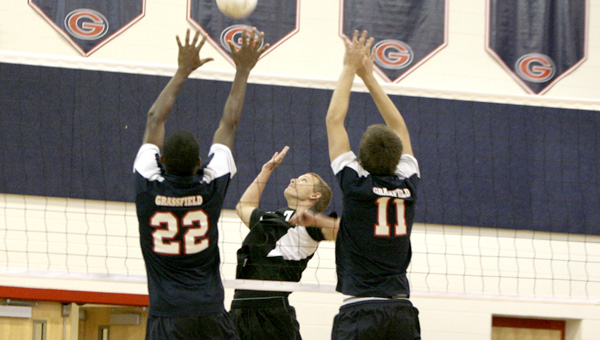 That said, some of the toughest opposition the Warriors might face this season is if Briesemeister and his assistants take part in a scrimmage during practice.

Briesemeister, Jason Taylor and Sean Debblay were teammates on a series of excellent Nansemond River teams and are 2006 classmates. Taylor was the primary setter on those teams, often setting for big spikes by Briesemeister or Debblay. They’re working together again, now on the sidelines.

“They’ve helped me in the past,” Briesemeister said.

“We play regularly together. I like to have people around me who I know well. I know how and what they’re going to teach the players,” Briesemeister said. “It’s great because we already know we can work cohesively as a team.”

In the boys match, the Warriors had to go without two starters. Having the whole team together has been a problem throughout the preseason practices.

Briesemeister, who coached for Norfolk Collegiate last season, said the Warriors have had a couple weeks of practice, but not much time with the full roster on hand as players have been out of town.

The Warriors had spurts of good play against the Grizzlies, but sporadic serving by the Warriors and consistent hitting by Grassfield was too much to overcome.

Josh Howard had 10 assists and Hayden Champigny had nine kills.

Howard served the Warriors out to a 5-0 lead to open the third set only for the Grizzlies to immediately rally to tie the set at 5-5, take the lead at 10-9 and stretch their margin from there.

“We’ll get a better indication of what this team can do next week when we have all of our starters back,” Briesemeister.

The Lady Warriors had their best chance to turn their match around in the second set. Kills by Danielle Gallagher and Courtney Lowers came in a 4-0 NR run to cut Grassfield’s lead to 18-16. Grassfield answered with six straight points. Set three was tied 9-9 before a 6-1 Grassfield run.