Lessons learned at the powwow 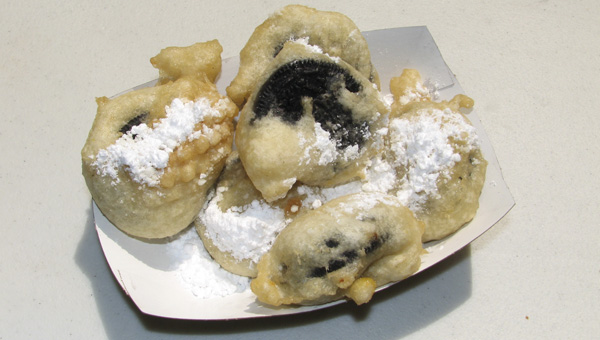 Deep-fried limitations: Though delicious and worth every penny, deep-fried oreos teach a valuable lesson about how much is too much.

It seems that each powwow I visit is an educational experience for me. Last year, the powwow was about starting to understand the purpose of the annual get-together. In essence, it is a family reunion of sorts, complete with dancing, laughter and meaningful conversations that reconnect tribe members.

That said, the lesson I learned this year was one I should have learned long ago. But, had I learned it, I probably wouldn’t be a type 2 diabetic and woefully out of shape. This year’s trip to the powwow in Chuckatuck was a little bit more about knowing when to say when. And anyone who knows anything about me will know in what arena this lesson applies.

So I found myself at the food trailers, lined up all pretty and smelling of everything from hand-cut French fries to saponi soup and some sweet-smelling bread whose name I can’t remember but looked a lot like a good old-fashioned funnel cake.

What was a diabetic in a lifelong love affair with food to do? What else? Holiday rules — much like martial law in times of civil unrest — take over and I am simply not a diabetic in that moment when I’m staring at the giant board that lists everything that particular food trailer has to offer.

I could spare you good people of Suffolk the list of food items that assaulted my person that hot summer day, but we’re like family now and I won’t dishonor you that way. So here it is:

• A Buffalo burger, which was just as bulky and cumbersome as the name and animal suggests. But absolutely delicious!

• Another hot dog, see above for toppings, minus the peppers, though.

(There may have been one more hot dog in there somewhere, but who can keep track.)

Last, but certainly not least on this eating extravaganza for the ages, was the big one. I ventured into territory that, since the diagnosis of my condition, I have been avoiding with all the willpower I can muster.

It’s been a mainstay of midways of carnivals and festival carts for years now. And I have cowered in fear, yet marveled in the potential delight of these genius concoctions. I am talking, of course, about deep-fried Oreos.

I had an order of these treats, and my lesson was learned. Because, while utterly delicious, those little deep-fried temptresses began speaking to me “Hey, maybe you’re eating too much, pudgy.”

So, after another awesome outing at the powwow I was reminded by an order of powdered-sugar-covered treats that suggested serving sizes should be respected, you should be able to eat just one Lays’ potato chip and, tragically, there should be an end to the never-ending pasta bowl.

I’ll try to control myself at the next powwow. But, I still need to find out what a coconut bomb is.