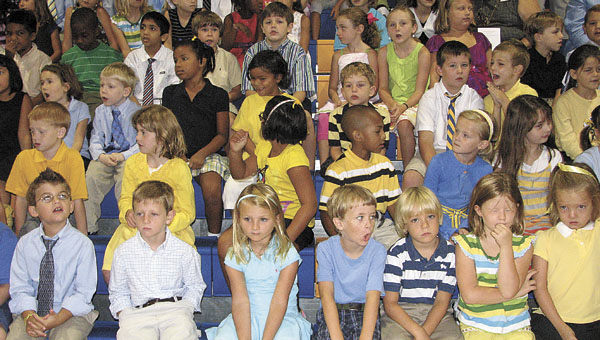 The tradition, pride and honor at Nansemond-Suffolk Academy were evident on Thursday.

The values fostered at the academy were palpable at the school’s convocation Thursday morning, which kicked off its 45th school year. Students’ faces, faculty speeches and the vibration of the bleachers as students cheered all conveyed the character traits the school aims to instill in its pupils.

Faculty, staff, students, alumni and trustees packed into the gymnasium to reflect on the school’s history and carry it forward into the future.

“We come together in celebration, with wonder and excitement, as we embark upon a new school year,” upper school student council president Ciara Viola said. “A new beginning, a new path, a new future — consider the possibilities.”

“Our traditions keep us returning each year more unified, driven by a passion for our school,” Viola continued. “Together we form a strong chain that builds our foundation.”

While the continuing of tradition was celebrated, students and alumni also made history.

A group of anonymous donors gave the school $1.25 million, a small part of which was put toward items including new paint, interactive whiteboards and renovations to the school — all of which are part of the school’s new strategic plan.

The remainder of the funds will be put toward the rest of the strategic plan, of which Bell said every element will be completed in the next five years.

The students showed that they are worthy of the investment their donors have made by turning out in force for the traditional event.

“No class has ever made 100 percent participation [on convocation],” Bell said. “Today, we’re at 99 percent. The one student who could not be here today is at home waiting for surgery. Even at 99 percent, you have made NSA history today.”

Bell reiterated a part of Viola’s speech in his remarks.

“Each one of you is a link adding to the excellence of our community, with honor above all,” Bell said.