Utility customers in Suffolk are beginning to get larger bills in the mail.

The water and sewer rates increased as of July 1 to the new rates, which are $1.62 per 100 cubic feet higher than last year with the two utilities combined.

“We have had some calls concerning recent bills and the rate increase,” said Al Moor II, Suffolk’s director of public utilities. 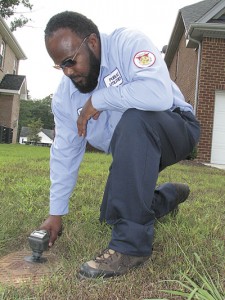 Water meter: Reginald Spratley reads a water meter in the Brewers Meadow neighborhood during his rounds on Thursday. Utility customers in the city are starting to feel the effects of a rate hike that began July 1.

The rate increase was publicized through letters inserted with utility bills after City Council adopted the budget in May, Moor said. In addition, an announcement was made on the city’s cable channel.

Because water and sewer are billed on a 60-day cycle, some customers could see an even bigger increase on their next bill. Those who had portions of May or June on their most recent bills would not have felt the full effect of the new rates.

Moor said the utility system’s capital needs are driving the rate increase, along with downturn in the revenue from growth. Earlier in the decade, the system was seeing between 900 and 1,000 new connections per year, but this year’s projection is only 325.

“What’s really driving our budget is the capital needs,” Moor said. “We’re ensuring we have sufficient capacity in our system, and also growth in our system.”

The utility system in Suffolk, like those in other Hampton Roads cities, also is under orders to fix leaks in its sewer system, Moor said. The find-and-fix program has been ongoing for several months.