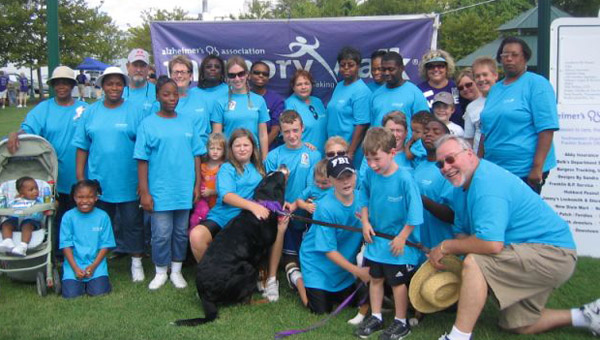 The Kindred Health Team participates in the 2007 Memory Walk in Franklin. The walk is coming to Suffolk this year.

In no right world would a mother forget who her children are, nor a husband forget his wife’s face.

But in a world with Alzheimer’s disease, it happens.

To fight against the disease and eliminate the stigma through better education about it, the Alzheimer’s Association is bringing its Memory Walk in Western Tidewater back to Suffolk for 2010.

“We’re changing the way we do the walk, and we want to be more visible,” said Patricia Bartosch, director of development for the Southeastern Virginia chapter. “We want people to see us. We want people to know we’re here, so they’re not alone.”

The Memory Walk will be held at Constant’s Wharf on Oct. 16. At a kickoff event on Thursday, 49 volunteers signed up to raise funds and walk.

“Oct. 16 will be here before we know it,” chairwoman Margaret Smith said. “We have a lot of work to do, and a lot of teams to get together. It’s time to gather your friends and neighbors.”

All the money raised funds research and medicine to cure the disease, but more important than the dollar amount is the presence of the walk and the people who support it.

To that end, the walk is being moved back to Suffolk, a central location for Western Tidewater.

“It used to be that we were tucked away at centers, where the residents and their families would participate, but we need to spread the word about it,” Bartosch said. “We felt that doing it downtown in Suffolk would be a good location for walkers from neighboring community to come. Our concern is to educate and spread the word about what this disease is and does, and that people affected are not alone.”

Warner: Focus on military, not jobs