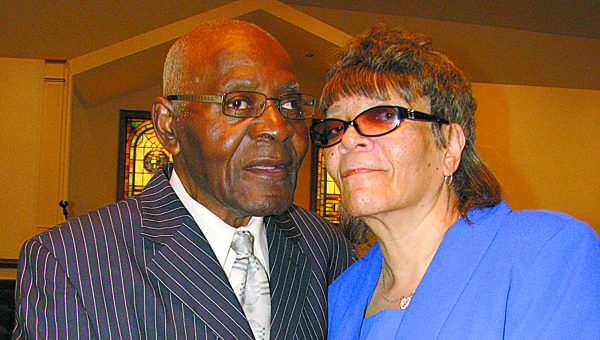 William P. and Lula Wiggins are the founders of New Mount Joy Food for Living Ministry. They will be honored next week with a special ceremony.

For the people of New Mount Joy Food for Living Ministry, the word “Planters” has a special meaning.

The large downtown church began as a ministry at Planters Peanuts. Employee William P. Wiggins began reading the Bible and praying with his co-workers during the lunch hour at work. The group of about 15 or 20 met outside for some time before Planters founder Amedeo Obici found out about it and gave them a space inside to conduct their Bible study. Wiggins was so respected in the factory that workers who had been suspended for misbehavior were required to attend his Bible study before they were allowed back on the job.

Out of that weekday group eventually grew a church that met on Sundays. Wiggins and his wife, Lula picked up each of the eight original members on Sundays in the family’s station wagon.

“We all lived in the same area,” their eldest daughter, Brenda Knight, recalled Friday. “We would blow the horn and they came running out.”

Next week, the church’s nearly 800 members will honor the “planters” of the church, William and Lula Wiggins, for the sacrifices they made in those early days.

The first Founders Week celebration will include services Sept. 1-3, a cookout on Sept. 4 and special services on Sunday.

“We felt it was right to honor him,” said William Thompson Jr. “If it wasn’t for him, there would be no New Mount Joy, and a lot of us would be in bad shape.”

The fledgling church met in private homes until it reached its final destination on County Street. In 1978, Wiggins left his position at Planters to pastor full-time instead.

In September 1983, the church moved into a 550-seat capacity building, but still was growing.

“One thing that bothered [Wiggins] was to see people being turned away from church because there wasn’t enough room,” said Thompson.

The Wigginses sacrificed a lot to make the church work, Thompson said. Lula Wiggins sewed her children’s clothes, and the couple had to forgo adding an extra room to their Whaleyville home because the church needed the money more.

“I don’t regret it a bit,” Lula Wiggins said.

Throughout the years, the church continued to draw people in through its various ministries, including a youth ministry. It now offers a Bible college, food bank, ministries for those recovering from drug and alcohol addictions, and more.

Youth and children were especially welcome in the church, Thompson recalled. He and Trevon Boone, now an elder in the church, grew up at New Mount Joy.

“He’s a young man in an old man’s frame,” Boone said. “Young people love his spirit. Regardless of where you were in life, regardless of what you’d done, they made you feel the love of God through him.”

Boone noted that the founding couple even attended his college graduation on a Sunday morning.

“They treat us just like we’re part of their family,” Boone said. “You just can’t forget the sacrifice they made for the church.”

William Wiggins no longer is the pastor of the church. Last year, he appointed Dr. Viola Parker as the new pastor, and his son, William Wiggins Jr., as co-pastor.

“We’re honored they would honor our father and mother in this manner,” daughter Brenda Knight said.

Next week’s services at the church, 307 County St., include:

Kill, till and fill

Lawn care: Deborah Moreno, at the Suffolk Lowes, recommends the “kill, till and fill” method to get your lawn green... read more