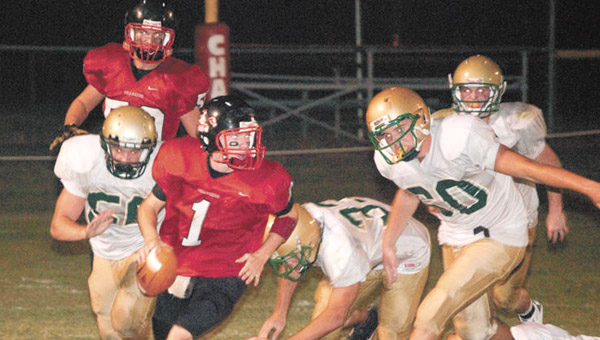 ISLE OF WIGHT — Bishop Sullivan Catholicís Jeffrey Swoope led the Crusaders to a 35-0 romping over a young Isle of Wight Academy team on Friday night.

Swoope rushed for 131 yards, including for 55- and 59-yard touchdowns.

The loss was tough for veteran Isle of Wight Head Coach Dale Chapman, who last year led the Chargers to the state championship game. Eight starters from 2009 were lost to graduation, and this yearís team has only three seniors.

“I say ‘don’t let experience be the crutchí because we have so many young guys,” Chapman said. “Hopefully they got a taste. Hopefully they will learn from this experience and they donít get down.”

The Crusaders put points on the board during their first scoring drive, when Brandte McIntyre scored on an 11-yard run with 6:36 left in the first quarter. The 2-point conversion attempt failed.

Isle of Wight capitalized on a Crusader mistake to make it to the 7-yard line, where senior Charles Keyt missed a field goal with 8:16 left in the second quarter.

On the Crusadersí next possession, Swoope scored on a 59-yard run. Mitchel MacCartney scored the 2-point conversion, giving Bishop Sullivan a 14-0 lead at the half.

Four minutes into the third quarter, Swoope scored on a 55-yard run for the Crusadors. The kick was good.

With 11:49 remaining in the fourth, Crusader quarterback Brian Novak threw a 20-yard touchdown pass to McIntyre, making the score 28-0 after the kick.

On the first play of the next Crusader possession, Steven Swoope broke open for a 65-yard touchdown with 9:11 remaining in the game.

– By Andrew Faison, The Tidewater News