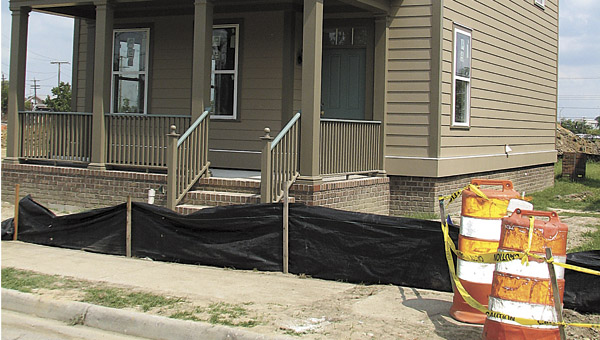 Constructed house: The first house to be constructed in the new Fairgrounds development is rising from the ground. The city has responded to some concerns raised by nearby residents.

The city has responded to some concerns raised by Hall Place residents over the new Fairgrounds development, but staff members remain adamant that their main concern cannot be addressed by the city.

Some residents are concerned that the new project, a revitalization effort off East Washington Street, is going to cram three houses into less than 140 feet of road frontage on Cedar Street. One of the houses already is in the midst of construction, and site-work has begun on the other two.

Community members say they had an understanding with a former project manager, who no longer works for the city, that plans would be changed to reflect two homes on the corner. Current city officials say that change never was officially made.

In any case, it appears to be too late now. The house that is already built is the one closest to Mamie Arrowood’s home.

“If they built two … that wouldn’t bother me one bit,” Arrowood said in July. “I’m not happy with three of them going there.”

The Fairgrounds, a revitalization effort off East Washington Street and Hall Avenue in downtown, has been in the works for about 10 years. City officials hope the public investment will bring increased private development along the corridor — a wish that some say already is coming true. The project will eventually encompass 36 single-family residences.

In a letter to Arrowood dated July 23, City Manager Selena Cuffee-Glenn reiterated, as in a prior letter, that the property no longer belongs to the city, but to Associated Contracting Services.

In response to other concerns raised by community members, though, the city has provided satisfaction. ACS agreed to decrease the width of Arrowood’s neighbor’s driveway from 12 feet to 10 feet to provide additional separation from her property. A curb cut on the sidewalk at the intersection of Cedar Street and Hall Avenue also will be installed, according to Cuffee-Glenn’s letter. On-street parking will be permitted along Cedar Street, except for an area approximately 20 feet from the intersection for traffic safety.

Finally, the city is reviewing its watering schedule after Arrowood reported to the city manager she had been watering the plants in the neighborhood park herself, the letter says.

Arrowood did not return a phone message left Friday.