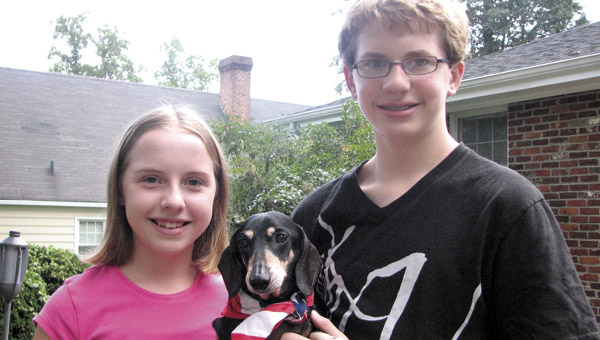 Adopting Junior: Sam and Sarah Grace Towler give lots of love to their “senior citizen,” Junior, who they adopted from the Suffolk Humane Society’s Mutt Strut last year.

Junior was a momma’s boy, who grew up on Long Island.

The black and tan dachshund had been a birthday present for his momma’s 11-year-old son and after the boy left for college, Junior spent his life in the lap of luxury.

All too soon, though, Junior found himself homeless.

That all changed at the Suffolk Humane Society’s Mutt Strut last year.

“When we got there, my son’s teacher came by and said there was a gorgeous dachshund in a tent over there,” Junior’s new owner Susan Towler said. “We went over there and there was this little senior citizen. Sam, my son, just fell in love with him.”

After walking around with him for a little while, the family had an impromptu meeting to discuss the responsibilities involved in caring for a senior dog.

“Mom, who else is going to adopt a dog that old? We’ll be the best senior citizen home,” her children decided.

Junior, now 13, is living the good life again with the Towler family.

“We took him home for a few weeks and just fell in love with him and decided we had to keep him,” Towler said. “So, we adopted him. Now, he sleeps with my son or daughter every night. He’s just a blessing.”

A part of the family, Junior has also taught the Towler children important life lessons.

“Our children respect their grandparents and are learning the importance of respecting elders by reaching out to this little old man,” Towler said. “He’s old. He shakes, he’s losing his hair, he only had 10 teeth and he’s nearly blind. We have to be very patient and gentle with him, and they’ve become very caring toward him.”

Junior was at the Mutt Strut with a rescue organization that his previous owner — who was undergoing cancer treatment and has since passed away — had given him to.

He had been with the organization for six months before he found a home through Mutt Strut, where many pets find homes each year.

A pledge walk — open for everyone, including virtual walkers, single walkers and dog walkers — along with demonstrations, pet screenings, microchipping, canine games, rescue groups, pet portraits and food and entertainment all will be on site.

“Owning a pet can teach your children so many lessons about commitment and responsibility,” Towler said. “Adopting one gives a home to one who needs it. They might come a little older or with a few bad habits, but if you’re willing to put the work in, we’ve learned they will make it worth your effort.”

To register and begin collecting pledges for the Mutt Strut, call the Suffolk Humane Society at 538-3030 or visit www.firstgiving.com/suffolkhumanesociety.