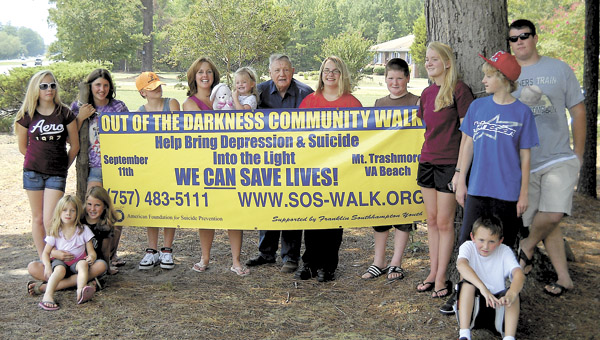 Community Walk: The youth group at Franklin Baptist Church is one of three from Western TIdewater that will participate in the Out of the Darkness Community Walk Sept. 11 at Mount Trashmore in Virginia Beach.

When a disease like cancer takes hold, it fatally affects the body.

When a disease like depression takes hold, it fatally affects the mind, leading in the worst untreated cases to suicide.

To raise awareness about the truth of suicide and depression, to remember those who have died by suicide and to raise money to continue the research, the fifth annual 2010 Out of the Darkness at Mount Trashmore in Virginia Beach will be held Sept. 11.

“Depression and suicide, they’re not just something that you read about or happens somewhere else,” said David Salerno, youth director at Bethlehem Christian Church. “The students in my youth group and our whole church are walking because a father in our church was a victim of suicide. We walk to honor his memory and his family. We walk so other families in other congregations won’t have to go through this.”

The Mount Trashmore walk is the largest of the walks that take place all over the nation.

Last year, nearly 1,800 individuals walked, many donning ribbons to represent their relationship with a loved one who died by suicide.

Every 15 minutes, someone in the United States commits suicide, and every minute someone attempts to commit suicide.

“I want them to know they’re not alone in their struggles,” Petrasek said. “Because it’s a chemical imbalance, talking about it won’t make it go away, but it can be the first step in getting the help they need.”

Having struggled with depression herself and her husband having lost his great-grandfather, grandfather and father to suicide her reasons to walk are many.

“I just want more people to realize that there’s help out there,” said Petrasek, also a teacher. “Years ago they’d put kids with special needs in a back room. There was a stigma surrounding them and you didn’t talk about their differences. Now, we’ve realized they’re born with a disease and have figured out ways to help them learn and they can have an important place in society. We need to view depression the same way. It’s a disease, and it is treatable. It’s a matter of getting it out there.”

To get out there and spread the word, visit www.soswalk.org.