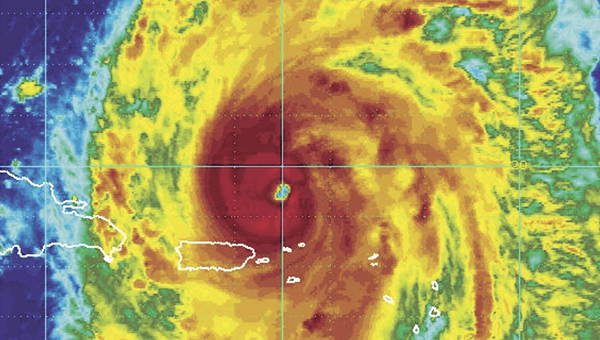 Impressive storm: Hurricane Earl, which was blowing as a Category 4 storm as of Monday night, is on a predicted track that would take it parallel to much of the United States’ east coast later this week. Local emergency officials were making basic storm preparations on Monday.

The annual Labor Day holiday weekend provides for a three-day weekend for many, a break from school for others and a chance to gather with friends over a grill cooking out.

But, this Labor Day weekend might get off to a rainy, windy start depending on the arrival time for Hurricane Earl.

Earl is expected to start impacting the weather in the Hampton Roads area late Thursday, though forecasters predict the area may only receive some heavy rain and wind, as the system is predicted to stay offshore as it races up the East Coast.

“The National Weather Service has told us we may only get some wind and rain out of this if it stays on its present course,” Suffolk Emergency Management Coordinator Capt. James T. Judkins. “We already briefed the city staff this morning on our preparations and what we are expecting.”

Judkins said his office has been in touch with National Weather Service and has set his department to “hurricane condition four,” which he says simply requires that all supplies are checked and all contact information for staff and outside agencies is updated.

“Even though we don’t expect too much from this, a portion of the projected path does include northeast North Carolina and southeast Virginia,” Judkins said. “We are going to keep a close eye on just where this storm goes.”

Late Monday afternoon, the National Hurricane Center upgraded Earl’s status to a Category 4 storm, with winds at or exceeding 135 miles per hour. Judkins said the area, at this point, should expect some brief, heavy rain and winds gusting to 40 miles per hour.

“This is the perfect time, even if we don’t get anything other than a little rain and wind, for everyone to update their hurricane plan and to make sure all their supplies are ready and in place,” he said.