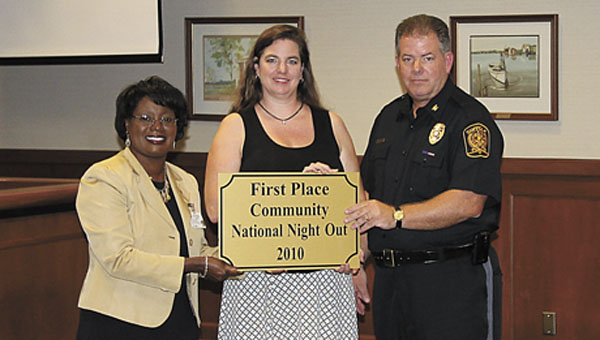 Dozens of community members turned out Monday for an awards and recognition ceremony for National Night Out participants.

“That was the most well-attended event ceremony we have had,” Diana Klink, Suffolk’s National Night Out coordinator, said Tuesday. “It was just really overwhelming.”

Communities, churches and civic leagues that had participated in National Night Out hosted block parties, cookouts, parades, ice cream socials and other activities across the city in a show of solidarity with law enforcement and community partners. Each event was evaluated by judges from Target and the Suffolk Initiative on Youth.

The Applewood Farms event was “a hands-down favorite of the judges, who raved about the anti-crime art contest the association had for the youth in their community,” Klink said. “They said the live band rocked and that attendance was excellent.”

“In just their second year participating in National Night Out, they’ve proven that they really know how to party in northern Suffolk,” Klink said. The organization got the word out to neighbors using email and fliers that reached more than 1,400 homes.

The rookie of the year award went to the Greater Oakland/Chuckatuck Civic League. The first-time effort by the 2-year-old league was held at the Chuckatuck Volunteer Fire Department station, and included “fantastic” food and several hundred guests, Klink said.

“This was the hottest party in town,” Klink said. “It’s evident that once again, Bethlehem threw out all the stops and provided an event worthy of a first-place award.”

Business awards also were given. First place went to the Suffolk News-Herald, with honorable mention to the Downtown Business Association/Fairgrounds Promotion Committee.

“Several downtown businesses worked together to host a cookout and community event attended by over 250 guests,” Klink said of the DBA/Fairgrounds event.