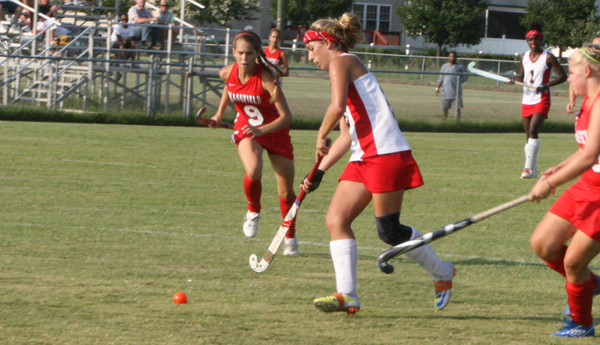 Nansemond River's Erica Dover scored two goals as the Lady Warriors romped to a 5-0 win over visiting Grassfield Wednesday. Nansemond River improves to 2-0 on the season.

Forwards Perri Holloman and Erica Dover scored two goals each as Nansemond River ran past, quite literally for a couple of their goals, Grassfield for a 5-0 district field hockey win Wednesday at Nansemond River.

In a matchup of teams that finished close to one another in the district standings last season, the opening minutes looked as though the score could’ve swung either direction.

Both sides had the ball in their respective scoring arcs on a couple of occasions. Nearing the midway mark of the first 30 minutes, the Lady Warriors turned Grassfield possession into rushes in on the Grassfield goal before the Lady Grizzlies could get enough players back.

Shelbi Holloman hit Dover with a long pass into the Grassfield arc and Dover turned and put a hard shot on goal. Dover’s shot was stopped and cleared, but Holloman was first to it and sent it back into the center of the arc.

Aubrey and Dover created traffic in front of the Grassfield keeper and Dover sent the ball toward the left post where Jessica Adams struck the ball into the unguarded cage.

Off the ensuing restart, Grassfield moved the action into the Nansemond River end again. Shelbi Holloman collected a Grassfield cross in her arc, dribbled out of danger toward the right sideline, then sent a 60-yard pass behind the Grassfield backs.

Dover sprinted to catch Holloman’s pass, cracked a shot on goal that was saved, but then barely beat the Lady Grizzly keeper to the rebound and with a lunging, one-handed swipe, scored the goal to put NR up 2-0 in the 15th minute.

“I told them I really wanted a goal in the first few minutes. They did exactly what I asked all the way around today,” said Nansemond River head coach Allison Mowry.

“I really stressed the importance of this game all week long. It was great to see they took it to heart and came out fired up,” Mowry said.

The Lady Warriors added their third goal of the half in the 26th minute. Dover intercepted a Grassfield clearance attempt, moved straight in on goal, but sent a pass to her right into the path of Perri Holloman for the goal.

Nansemond River put the match out of reach as Perri Holloman and Dover scored again within the first seven minutes of the second half. Adams and Mary Gover got the assists on the fourth and fifth goals.

“We know when we want to switch fields and we did that well today and we know when to use the long ball. We played a very selfless game today,” Mowry said.

The Lady Warriors (2-0, 2-0) have another full week between matches again. This time they can get ready for city rival King’s Fork on Wednesday at Nansemond River.

Earl closes in on Va.