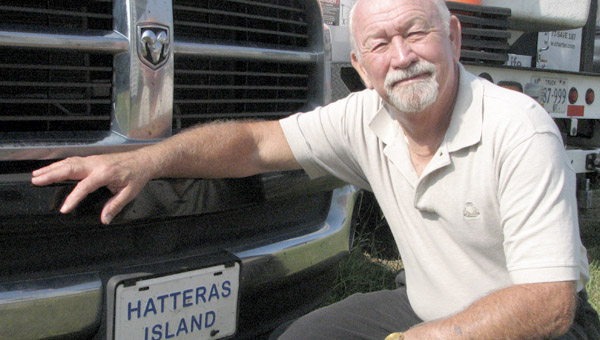 A price to pay: Ken Insley is thankful to have a home in Salvo, near Cape Hatteras, but there is a price to be paid. He is preparing his properties on the island, where visitors were evacuated on Wednesday, for the storm. Nearby Ocracoke was evacuated of both its visitors and residents, as well.

People who live on the Outer Banks of North Carolina are used to the uncertainty that rules their lives during this part of the year.

They’re used to keeping a stockpile of water and canned goods, driving through washed-out roads and knowing that at any given time they might have to grab their Social Security cards, birth certificates and prescriptions and head inland.

For them, it’s the price of living in heaven.

On Wednesday morning, residents and visitors on Ocracoke Island and visitors on Hatteras Island were ordered to evacuate. Elsewhere on the Outer Banks, people were getting their properties secure.

“We’ve gotten anything that the wind could make into a projectile tied down,” said Ken Insley, of Suffolk Alignment and Car Care and a homeowner in the town of Salvo, near Cape Hatteras. “We’re taking care of screens, helping neighbors out with their rental properties, raising up our freezers and refrigerator, and we’re going out to take care of our business property this evening.”

While the storm is causing some folks to worry, Insley is a seasoned veteran to the area’s storms.

“The power goes out, the house shakes, there’s torrential, torrential amounts of rain — so badly you can’t see far,” Insley said. “It can be scary.”

Past storms have carried part of his roof away and forced him to replace furniture, insulation, outlets and flooring.

But while the threat of damage is always present, some residents aren’t planning to leave.

“I’m concerned, but not as concerned as I was with Isabel,” said Dave Dougherty, of Preacher’s Tire in Suffolk and a Kitty Hawk resident. “I wouldn’t leave for anything less than a Category 4 hurricane. I’m not as worried about the storm as I am the damage the vandals would do if we evacuated. It’s just a matter of making sure my wife and dogs are safe.”

Despite the long commutes that both men have to make every day and the annual storm hazards, living in the Outer Banks is worth it, they say.

“It’s a wonderful place down here,” Insley said. “It’s beautiful. It’s nature at its finest. I think I’d be just as safe in my house as I would be [in Suffolk].”

“My only regrets living down here is that I didn’t do it sooner in life,” Dougherty said.

DMV computers should be working today

The Department of Motor Vehicles will be fully operational today, according to a state announcement on Wednesday. DMV expected to... read more