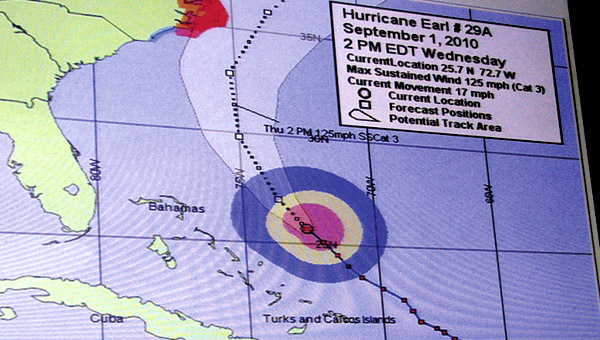 Local governments in North Carolina on Wednesday declared hurricane warnings and ordered evacuations of vulnerable areas as Hurricane Earl kept forecasters guessing at how close it will come to the East Coast.

A hurricane watch is in effect for the Virginia coast. Meanwhile, forecasters are keeping an eye on Tropical Storm Fiona and Tropical Depression No. 9 as they swirl in the Atlantic. Earl’s effects are expected to arrive late Thursday night and early Friday morning.

“Fiona is a little bit stronger than it was yesterday, but still a tropical storm,” said Bill Read, director of the National Hurricane Center, late Wednesday morning. “It will be struggling in the path of Earl.”

As Read spoke, Earl was moving northwest at about 15 miles per hour. It had been downgraded to a Category 3 from its Category 4 status on Tuesday, but Read said the storm had not weakened very much.

Gov. Bob McDonnell declared a state of emergency Wednesday in preparation for the storm. The action authorized state agencies to position resources and manpower for a quicker response to storm conditions.

“It’s more of a fluctuation,” Read said. “The chance of a change in intensity still exists.”

The National Hurricane Center was predicting Wednesday afternoon that the storm would pass the Virginia coast on Friday morning. Tropical storm-force winds were forecast for much of the state, with the Hampton Roads and Outer Banks areas set to receive hurricane-force winds.

The hurricane is then expected to track along the East Coast up through New England and into the Canadian maritime provinces, Read said.

“The large amount of highly foliated threes this time of year could extend damage, he said, adding that vacationers at the beach also should watch out of extremely high waves and rip currents.

Craig Fugate, administrator of the Federal Emergency Management Agency, said supplies were being moved into place from North Carolina to New England, and teams were either in place or ready to go for all the East Coast states. He stressed that people should build flexibility into their vacation itineraries and have family contingency plans.

“Be mindful that there may be evacuations ordered, and you may have to postpone or delay your trip,” he said. “Our best advice to people is make sure you know what you’re going to do and have a plan.”

For information on the storm’s forecasted track, visit the National Hurricane Center’s website at www.nhc.noaa.gov. For general information on hurricane preparedness, visit www.ready.gov or www.readyvirginia.gov. Those using a mobile device can visit m.fema.gov.

Report: JFCOM worth a billion