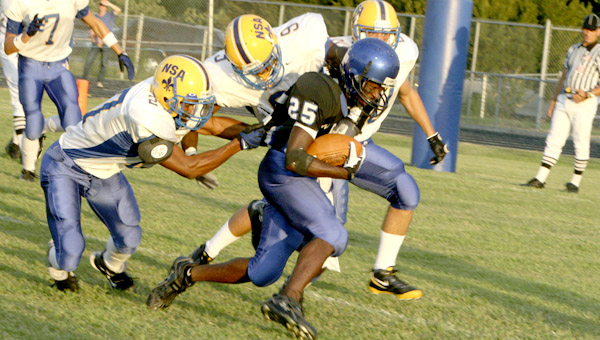 Season opener: Windsor’s Mark Fenner closes in on the end zone against Nansemond-Suffolk’s Kenny Rice, left, and Domonique Lennon during the Dukes’ 28-0 win over NSA last year. The Saints host Windsor Friday at 7 p.m. in the season opener for both squads.

The Dukes and Saints renew their traditional, season-opening, rivalry.

Last year’s contest wasn’t much of one as the Dukes beat NSA 28-0 and no one, except probably NSA coach Kevin Allen, who was making his debut that night, would’ve guessed the Saints were going to go on to be state champs.

Windsor’s won the last five games in this series and the Dukes’ shotgun, option running offense has troubled the Saints most of the way in those games.

With most of his defensive starters returning, Allen projects an improved defense for the Saints after NSA’s defense was already its strength last season.

On the offensive side, replacing tailback Will Crenshaw is NSA’s most obvious challenge. Senior quarterback/defensive back Domonique Lennon returns. Allen, who brought in his brother Pete Allen as his new offensive coordinator, wants to go to more of a passing attack than last season.