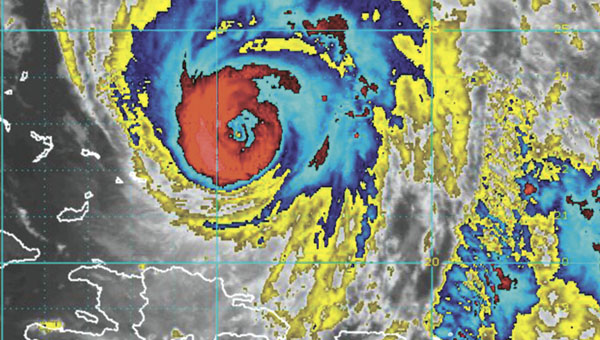 Hurricane Earl, seen in this satellite image, is headed toward the East Coast.

Suffolk’s emergency officials were breathing a conditional sigh of relief Thursday afternoon as tracking and forecasts from the National Hurricane Center in Miami indicated that Hurricane Earl should turn out to be a minor weather event for the city.

Things could have been a lot worse with the slightest of deviations from the storm’s path up the East Coast on Thursday and Friday.

“If it had come ashore at Oregon Inlet, it would have been a whole different story,” Judkins said, noting the 3 p.m. predicted track that had the hurricane remaining off the coast of North Carolina and then skipping out to the east of the Mid-Atlantic states while making a beeline for the Maritime Provinces of Canada.

Conscious that he was talking about the likely — rather than the definite — path of the storm past Virginia more than 12 hours before it was expected to pass, Judkins said it looked as if Hampton Roads would be spared the wrath of a large and violent hurricane.

The Oregon Inlet landfall, he said, would have been “a worst-case scenario for Hampton Roads,” putting the area in the northeast quadrant of the storm, which was still classified as a Category 2 hurricane at 5 p.m. Thursday.

Considering that tropical storm-strength winds extended out more than 250 miles from Earl’s center, exposure to the strongest part of the hurricane for the time it was expected to take the hurricane to pass over the area could have been severely destructive.

With Earl on its projected path on Thursday, however, the effects in Suffolk were expected to be only mildly tropical, with rainfall totals of less than a half inch and maximum wind gusts of 30 to 40 miles per hour, Judkins said. The worst of those effects were expected at about 3 a.m.

After passing Virginia, he added, Earl was expected to “haul freight up the coast.”

Officials from the Federal Emergency Management Agency said in a conference call Thursday morning that they had representatives on hand in areas from North Carolina’s Outer Banks to Massachusetts, the two states most likely to catch parts of the passing storm.