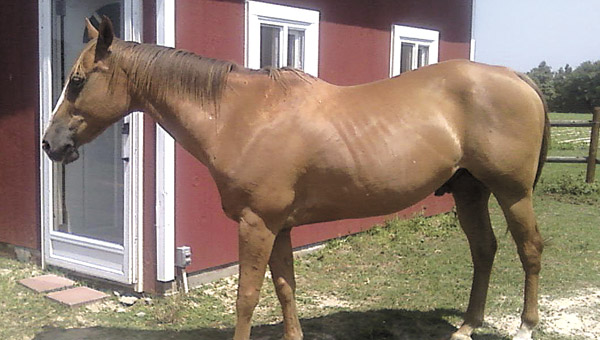 Missing Comet: Comet is missing from his Whaleyville home, as of Monday evening. If anyone has seem him call Frances Holland at 642-1304. He is chestnut colored with a white marking on his forehead.

This isn’t your usual lost-pet story.

Comet got loose on Monday, and his owners have been worried sick about him ever since.

The difference between this and your usual lost-pet story, however, is that Comet is a 14-year-old horse, and he broke out of his barn on Monday.

Comet’s owner, Frances Holland, has been leading a search effort and is looking for help from her neighbors far and wide in rural Whaleyville.

“This has never happened before, it’s really unlike his personality,” Holland said. “I just want him to come home. We’re heart-stricken that we can’t find him.”

Comet, a quarter horse, is a bit more than 15 hands tall and is chestnut-colored with a white star on his forehead.

“He’s not wearing a halter, but anyone could walk right up to him,” Holland said. “He likes carrots and apples, but he’s really just a sweet horse.”

The horse escaped around 4 p.m. on Monday from its barn on Arthur Drive and headed into the forest toward Longstreet Lane, according to Holland.

After two hours of searching through the forest, Holland called animal control to notify them and resumed her efforts the next day with the help of friends and neighbors.

“We have been looking for him from daylight until dark,” Holland said. “A group of girls form Mulholland Farms came out yesterday, two friends came out last night and rode their horses out to look for him, neighbors have come out. We notified the airport, and they’ve flown over to see if they could see him. We’re doing everything we can.”

Comet has been with Holland for the past four months, helping her train three wild mustangs, which Holland adopted.

Holland said she believes a mustang and Comet were in a fight, which is what led Comet to break out of the barn.

“But it’s just not his personality to go and not come back,” Holland said.

If anyone has seen a horse fitting Comet’s description please call Holland at 642-1304.

Claiming now that she was forced to resign her position, Sharon Thornhill, who abruptly and with no public explanation left... read more