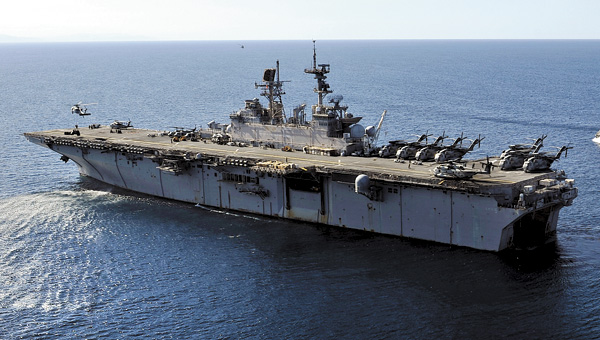 The USS Bataan, an amphibious assault ship, returned in April from an 80-day deployment to Haitian waters, where it took part in an international humanitarian effort to help the nation following its devastating January earthquake. Above, the Bataan operates off of Baie De Grand Goave, while an MH-60S Knighthawk lifts off from the ship’s deck and an air-cushioned landing craft makes its way to shore from the Bataan’s well deck.

Think of the union between ancient Egypt’s Queen Cleopatra and the ancient Roman ruler Mark Antony. Or the ambitious English gentleman, Sir Walter Raleigh, whose friendship with a queen helped found a New World. Or the invention of the printing press, which led to the Protestant Reformation.

In a similar way, that arc connects the city of Suffolk and the Bataan Peninsula in the Philippine Islands. The connection goes all the way back to 1942, when 78,000 American and Filipino troops, who had surrendered to the Japanese army, were forced to march 65 miles over six horrible days to a Japanese prison camp.

Senior Master Sgt. Norman P. “Jack” Matthews, a Suffolk native, survived the march. His brother, Edward Matthews Jr. — who enlisted in the Army the day after Jack Matthews and served in the same squadron as Jack — was unable to sustain himself through the torture of Japanese captivity and died in 1942 while still imprisoned.

Suffolk, it turns out, has an especially soft heart for survivors of the Bataan Death March and other veterans of the fight against the Japanese empire.

“I get misty-eyed just thinking about these guys,” said William Blair, who for years has sprung for breakfast once a month for a group of World War II veterans, mostly from the Pacific theater, who have gathered to swap stories, educate admirers and generally keep in touch with one another.

Jack Matthews was a longtime fixture at those breakfast meetings until his death in 2009 at the age of 92. He was posthumously honored this year by the Suffolk post of the American Legion, which renamed itself the Norman “Jack” Matthews Post 57.

As Suffolk has honored the memory of Jack and Edward Matthews, the U.S. Navy also honored the American and Filipino servicemen who fought so valiantly before they were forced to surrender to the Japanese on the Bataan Peninsula near the beginning of World War II. The USS Bataan, an amphibious assault ship, was commissioned Sept. 20, 1997.

Petty Officer Second Class Teddy Chambers, a hospital corpsman aboard the USS Bataan, prepares to restock an IV for one of the Haitian patients brought aboard the ship from Haiti for treatment.

It is the fifth of the Navy’s WASP-class ships, and its mission, according to the Navy, is “to enable the Navy and Marine Corps team to accomplish a seamless transition from the sea to the land battle as the lead ship and centerpiece of an Amphibious Readiness Group.”

The ship can accommodate a full Marine Expeditionary Unit of 2,000 Marines, along with helicopters, air-cushioned landing vehicles and amphibious vehicles to deliver tanks, vehicles, artillery, ammunition and other supplies to support the Marines.

As it turns out, the Bataan also makes a pretty good hospital.

In April, sailors and Marines attached to the Bataan returned from an 80-day deployment in support of Operation Unified Response, the humanitarian effort following the devastating Haitian earthquake. The Marines and many of the sailors went ashore to provide help with the recovery effort, and the space occupied by their equipment was transformed into an orthopedic hospital that treated 97 patients during the time the ship was stationed off the coast of Haiti. The Bataan was the first American military ship on the scene and the last to leave Haitian waters at the end of the operation.

While in Haiti, the ship had “the largest medical capability in the Navy, aside from (the Navy’s) two comfort ships,” Tony Sisti, the Bataan’s public affairs officer, said in May during the return trip to Norfolk.

Averaging 10-20 patients a day for the first couple of weeks on station, the ship and its 80-person augmented medical crew were a vital part of the humanitarian response. Everyone who was brought aboard the ship for treatment ended up surviving their injuries, Sisti said, despite the fact that so many of those injuries were so different from the types that doctors aboard the Bataan were used to seeing.

“We’d been through mass casualty situations in Iraq, but this was totally different” than the gunshot and blast wounds that came out of that operation, said Petty Officer Second Class Teddy Chambers, a hospital corpsman, as the ship made its way north along the eastern seaboard in April. With the crush injuries that required orthopedic specialists and the children who needed pediatric care, “We did a lot more than this ship normally could do,” he added.

Chambers, who has served in the Navy for six years and on the Bataan for about a year and a half, lives in Suffolk with his wife and two young sons. It is just one of the many connections the ship’s crew has with Suffolk.

Back at Bunny’s Restaurant, commanding officers, chaplains and sailors who serve on the Bataan are regulars during the monthly veterans’ “breakfast club.” Whenever the ship is in port — as it was scheduled to be for five months upon returning to Norfolk in the spring — sailors of all ranks have made an effort to join the aging men and their families and friends for breakfast in Suffolk.

“This has been, for me, an amazing history lesson,” Chaplain Thomas Cook said as he sat near Stanley Woody in May 2009.

Woody had served aboard the USS Houston, which was sunk during the Battle of Sundra Strait in February 1942. His story of escaping from the sinking ship and swimming to shore, only to be met by Japanese soldiers with rifles, was a favorite of those who’d come to learn about the war. Cook, who was chaplain of the Bataan at the time, had come to pay his respects once more before being reposted to another ship.

Woody died in June, and the sailors of the USS Bataan came out to Suffolk once again for him, this time to pay their respects at a service at the Albert G. Horton Jr. Memorial Veterans Cemetery. An honor guard from the ship joined more than 100 of Woody’s friends and relatives at the cemetery June 7 for the 22-year veteran’s interment ceremony.

“It’s important for our sailors to understand their heritage,” Capt. Steve Koehler, the Bataan’s commanding officer, is quoted on the ship’s website as having said of the crew’s involvement in the memorial service. “We owe it to men like Woody to learn their stories and pass them along to future generations.”

One day, men like Petty Officer Chambers could find themselves in the position to pass along their stories to new generations, perhaps even at Bunny’s Restaurant.

Perhaps in the course of telling those stories, they’ll even remember the following words that were spoken by Capt. Tom Negus, commodore of the Bataan Amphibious Relief Mission, as the crew stood on the deck of the ship prior to leaving Morehead City, N.C., on the way home:

“What you did in Haiti was great, a true greatness that comes from giving of yourselves. Thousands and thousands of people are alive because of you.”

It was a fitting tribute to a crew that had sacrificed so much, and the sacrifice was appropriate from a ship whose name honors those who gave so supremely in World War II.

And both the tribute and the sacrifice contribute to the unlikely bond that exists between one small Virginia city and one big amphibious assault ship.

Actual emergency planners as well as engineers and technicians interact with other sites across the nation in a disaster scenario... read more