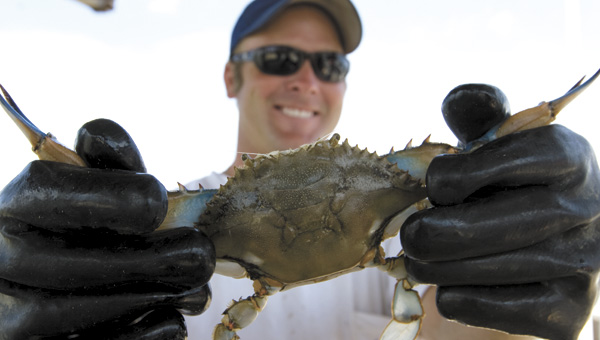 Ben Johnson of Eclipse holds a Chesapeake Bay Blue Crab, one of the 30 bushels worth that he and a helper hauled in during a recent morning of checking traps on the James River. Johnson and Sons Seafood has been operating in the Eclipse area for nearly 35 years.

Shades of pink are just starting to creep across the night sky when Ben Johnson pulls up in his pickup truck to the pier in Eclipse.

The stench of dead fish is heavy in the relatively cool July air. Gravel spins under the tires of Johnson’s two-tone Dodge Ram — license plate: SOFT CRB — as he parks it for the day.

It’s still before dawn, but Johnson is running late. He usually gets to the pier by 4:30 a.m.; now, it’s closer to 5. Time isn’t on his side. He has 275 crab pots to empty before he must be done at 1 p.m., per state conservation regulations. He also doesn’t want to disappoint his customers, many of whom will line up at the pier starting at noon, anxious for his return with a boat full of fresh crabs. 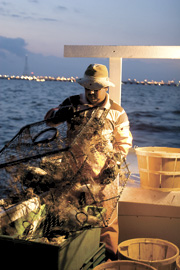 Berna “Shorty” Drujillo empties a crab pot aboard the Lisa Dawn as the boat works a line of traps in the soft light of dawn on the James River. There are still about 270 to go.

Johnson and his father, Robert, are partners in Johnson and Sons Seafood. The business has been operating from the Eclipse area for nearly 35 years.

“It didn’t have a name until Ben came to work with me,” said Robert “Robbie” Johnson, Ben’s father. “When I got out of school in 1975, some of my friends were doing that and it was just something that interested me. I kind of got into it and got going with it and all this time later, I’m still at it.”

When Ben finished college in 2001, he joined his father in the business. He is an unusual case.

“It’s a dying industry,” Ben Johnson said. “There’s very few people my age. It’s not something that’s being handed down and passed down.”

On the pier this Friday morning, Johnson works swiftly to make up for lost time. He and a helper, Berna “Shorty” Drujillo, pack the “Lisa Dawn” — named after Ben’s mother — with supplies for the day. Bottles of water, baskets and $50 worth of dead menhaden baitfish packed in boxes are tossed from the pier into Drujillo’s waiting arms.

Soon, it’s time to ship out. Johnson fires the motor and takes the controls in the cabin. As he turns the polished wood of the wheel from within the tiny wheelhouse of the Chesapeake Bay deadrise, the boat leaves Chuckatuck Creek and emerges onto the James River. The sun is still below the horizon.

Johnson follows the same routine six days a week, taking only Sundays off. This year’s harvest of crabs has been good, but the watermen of Suffolk still gamble with risk and uncertainty. Johnson and Sons Seafood is no different.

As he makes his own 20-minute commute to the mouth of the Pagan River, Johnson guides the Lisa Dawn beneath the James River Bridge. Noting the line of bright red brake lights in the dim light of dawn, he observes the raised steel grid of the drawbridge.

“There’s a lot of angry drivers this morning,” he says.

With only a couple of crabbers working the portion of the James where his pots are located, traffic isn’t a big concern for Johnson. Crab populations and state regulations are the things that cause him stress.

This year’s harvest is good, but it wasn’t always that way. Just two years ago, blue crabs were scarce in Virginia waters, and harsher regulations — such as the 5 a.m. to 1 p.m. harvest period — took effect. Both Johnsons say it’s too soon to tell if the new regulations were effective.

“We may turn around next year and not be able to find a crab,” Ben Johnson said.

His father was more philosophical.

“Man is a little bit egotistical in thinking these things he does make that much of a difference,” Robert Johnson said. “There’s too many variables in there that can’t be measured.”

Despite the fickle nature of the industry, however, Ben Johnson says he enjoys that he never quite knows what his pots will yield from day to day.

On this cool July morning, he finds that the haul is pretty good. Even in the faint light from the moon and impending sunrise, he steers the boat right to the first buoy of the morning. His crab pots are marked by black buoys with green stripes — registration number C5075.

From his spot on Lisa Dawn’s starboard side, Johnson can steer the boat using a secondary metal wheel and throttle. With Drujillo positioned behind him, Johnson locates the buoy with a spotlight, casts a long pole toward the buoy and hooks the attached rope.

After bringing the buoy close enough to grab it, Johnson wraps the rope around a spinning metal gear that reels the rope in. He pushes the buoy and rope toward Drujillo as the crab pot rises from the water.

With one swift motion, Johnson loosens the mucky rope from the spinner, hauls the crab pot out of the water, opens the door to the bait compartment and dumps the spoiled remains into the river. He gives the crabs trapped in the wire cage a critical eye before turning to steer the boat once again.

The rest is up to Drujillo. With well-practiced motions, he unhooks two sides of the trap and gives it a few violent shakes, sending crabs tumbling into the slotted bin at his feet. The catch scrambles for an escape route as Drujillo stuffs two or three dead fish into the bait compartment, latches the door, hooks the sides back together, tosses it into the water and knocks the buoy off the side of the boat.

As the Lisa Dawn approaches the next trap, Drujillo begins sorting the crabs into separate baskets. Those under five inches must be thrown back, with the exception of “peeler” crabs, which are getting ready to molt. These will be monitored at the pier warehouse until they shed their skin, at which time they become the popular softshell variety. Females without eggs and with eggs are separated, and the “jimmy” crabs are sorted by size — small, medium and large.

After a few crab pots are emptied, the sun rises enough to reveal the scenery — opulent waterfront homes, the James River Ghost Fleet in the distance and even a bald eagle keeping a wary eye on the boat’s movements. The choppy waves keep the boat rocking on every axis, sending spray over the side of the boat and keeping Johnson’s framed wedding photo — taken on the Lisa Dawn — swinging wildly on the rear wall of the cabin.

Johnson says he’s lucky that his wife, Christi, takes the challenges of being a waterman’s wife in stride. She understands that money is tight sometimes, like when a nor’easter last year caused severe damage to the building that houses the office and molting operation and loosened several of the $30 crab pots from their buoys.

“It’s an expensive industry to get into, between the boats and the crab pots,” Johnson said.

The two men empty crab pots for the next seven hours, with only brief interruptions. Robert Johnson calls several times for updates on the catch. Ben drops the pole in the murky water once — fortunately, it floats long enough for him to back up and retrieve it.

As baskets fill up with crabs, the boat fills up with baskets. Ben Johnson swiftly places a lid on each full basket as the topmost crustaceans make a last-ditch effort to escape, wildly brandishing their largest claws in defiance against Johnson’s gloved hands.

By the time noon arrives, 30 full baskets are stacked in nearly every available space on the boat, and most of the crab pots have been emptied. Johnson and Drujillo pause to clean the boat and themselves before they head back to the pier.

As he steers the boat from the cabin once again, Johnson works out the day’s profit on a small notebook. He estimates that he’ll make $1,200 from the crabs on the boat. After taking $200 out for bait, fuel and pay for Drujillo, Johnson has made $1,000.

When he arrives back at the pier, half a dozen helpers are waiting to unload the baskets of crabs. Several customers are already in line, trading folded bills for enough crabs to fill the steaming pots they have brought.

“They taste sooo good,” said Arleathia Parker, who says she buys crabs from the Johnsons about three times a year. “I buy them especially when I have my family reunion.”

While Ben has been on the James River, Robert Johnson has also been pulling peeler crabs from the water near the Harbour View area in Suffolk. About one-third to one-half of the day’s catch will be sold directly to customers at the pier. The rest will go to wholesalers in the area, who sell them to markets throughout the world.

“Something that’s here today — in two days, it can be across the country,” Robert Johnson said, noting that some local crabs go as far as Japan. “The people we deal with, they can get that product out there.”

The Johnsons fish for crabs through November, when they break to do maintenance on the boat and install the oystering equipment. They haul in oysters throughout the winter, and also sometimes fish for striped bass. Crabbing season begins again in the spring.

“When I first got into it, the main thing we did was oystering,” Robert Johnson said. “That kind of played out. The watermen kind of got blamed for over-harvesting. Personally, I feel like it was the two diseases that have been killing oysters.”

Those diseases — dermo and MSX — “have pretty well decimated the oyster business,” said Thomas Hazelwood, a former fifth-generation waterman who still owns the pier and building used by the Johnsons. “It never has gotten back to what it was before then.”

Hazelwood’s ancestors were among the first watermen in Eclipse, coming here from Accomack County in 1858. Communities in what is now North Suffolk — particularly Eclipse, Hobson and Crittenden — once thrived on the oyster business, but after 20 years in the business, Hazelwood decided he couldn’t do it any longer.

“I had a better opportunity,” he said. “I had children to educate and property to maintain.”

The financial side of the business is one thing nobody particularly enjoys.

“It’s a necessary evil,” said Ben Johnson, an economics and accounting major during his years at college. “It costs me about $200 a day to come do this. If it gets to where I can’t make $200, I’m going to go do something else.”