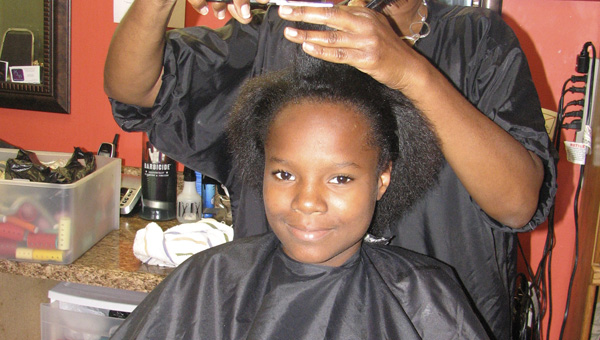 Sitting in the row of chairs against the wall at a local salon recently, a few new faces patiently waited their turn among the regulars.

One of them was Shaniqua Walker. As she settled into the chair, Shaniqua asked her stylist for a trim off the ends to get her hair curled.

Next week, she’ll be starting her seventh-grade year at Forest Glen Middle School in style.

“It’s a new look, new year,” Walker said, sitting in the stylist’s chair at Klassy Kuts Unisex Salon on Thursday. As the stylist measured and snipped, other children looked on from the waiting area.

Walker was one of 10 girls and 10 boys who received new hairdos for the new school year courtesy of the Living Water Ministry.

“Hopefully, it will give them a sense of pride and image about themselves,” associate minister Annette Jones said. “When you feel good about yourself, it can make the first day of school more exciting. It can give you confidence. That’s what we want to give to students.”

The ministry usually gives out back-to-school supplies, but this year members decided to pay for new haircuts and hairdos for 20 students.

“There were so many organizations giving out back-to-school supplies this year, we wanted to meet another need,” Jones said.

The church is located at 211 E. Washington Street, Suite A.

“We’re a small ministry, but we want to touch the Suffolk community one person at a time,” said pastor Karyn Watson.