Fighting fire as a family 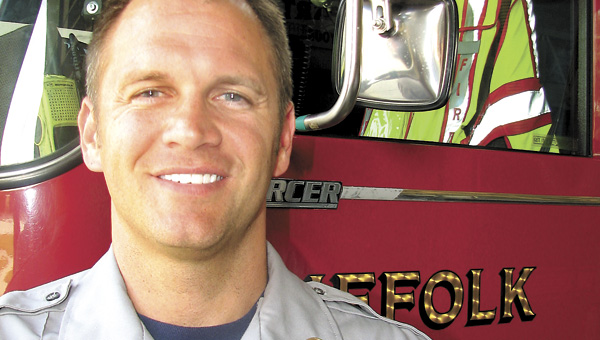 Fire Capt. Steve Johnson says firefighting is a family affair. He enjoys serving the community and serving alongside his friends in the fire service.

Finding one’s calling in life can be an arduous journey of self-exploration, sacrifices and trial and error.

For Suffolk Fire and Rescue Capt. Steve Johnson, his call to service was clear all along.

Johnson’s father was a firefighter for 24 years, and his uncle has been serving in the fire department for more than 30 years.

“I was 19, and I had already graduated and it hit me — Why am I not doing what my family has been doing all along?” Johnson said.

Today, after more than 15 years with the Suffolk Fire Department, Johnson says he has never regretted his decision.

“I can’t get enough of the fire service,” he said.

Johnson, a Lakeland High School graduate, said serving the community he grew up in has been one of the greatest perks of the job.

“I’m happy to be able to help the city I grew up in,” Johnson said. “We want to make people living in Suffolk enjoy life in Suffolk. I see people that I went to school with, and I am able to help them — help make a good thing out of a bad thing. It’s just a reward of this profession.”

While Johnson considers serving the community a reward, he also points to the people he serves alongside as an additional benefit.

“I love being around my crew,” Johnson said. “We have five-day breaks, and I find that on the third day on a five-day break, I’m ready to go back just to see everybody. It’s another family to me.”

Given the physical and emotional stresses inherent in running round-the-clock calls together, Johnson said the department learns to adapt together.

“People think that we’re at the station playing checkers and cards or sleeping all day, and that’s not the case,” Johnson said. “To explain what we go through every night, I tell people to have someone else set your alarm clock. Then, when that alarm goes off, put some new clothes on, run around your house five times and then come back and try to fall asleep. It really is a stressful job and a lot of work, but I enjoy working with my crew, and our department is a tight family.”

That family provides a crucial service to the men and women of Suffolk.

Since the early ‘90s, Suffolk officials have required that firefighters be trained emergency medical technicians, as well.

“Back in the day, the only thing we had in the truck was a first aid kit,” Johnson said. “Now, there aren’t many fire trucks without a paramedic on board.”

Johnson himself takes pride that the department has prepared firefighters to be comprehensive emergency responders.

“The average age of our firefighter is 33 to 34,” Johnson said. “We’ve got young, aggressive firefighters and officers, and you have some of the best trained medical personnel coming to your aid. It’s just a reward that there are a lot of people that know they can call 911, and we’re coming to your aid and we’re going to take care of you.”

For more information about the Suffolk Fire and Rescue Department, visit http://www.suffolk.va.us/fire/.